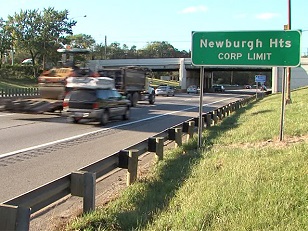 Thousands of drivers caught in a Newburgh Heights speed trap who fail to pay their citations are being misled into believing both their credit scores and financial future are at risk.

The Village of Newburgh Heights has been operating one of 16 speed cameras that generate revenue for municipalities across Ohio. The village’s program has been a source of public debate since its inception in 2013.

Last year it resulted in $2.4 million dollars in revenue before expenses, according to Newburgh Heights Mayor Trevor Elkins. The program covers two locations, including a three-quarter-mile stretch of Interstate 77 (I-77) as well as Harvard Avenue – both going through Newburgh Heights.

According to Elkins, the village expanded its police force, growing from no full-time police officers to six full-time officers with two patrolling the streets at all times.

Newburgh Heights is a village of 2,000 residents that covers half a square mile.

“This program has allowed us to keep our streets safer,” Elkins said.

The village hired a police officer in July of 2015 for traffic enforcement that includes the handheld laser camera on I-77 along with the fixed cameras on Harvard Avenue.