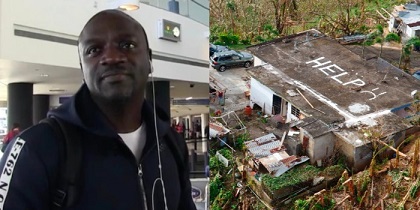 Akon’s music is what he is most known for, but his philanthropy is equally worthy of attention. This includes  “Akon Lighting Africa” a company he founded with Samba Bathily and Thione Niang in 2014 which aims to provide electricity via solar energy to African countries. Madame Noire reports that in a recent TMZ interview, Akon explains how he planned to bring this help to Puerto Rico before getting rebuffed.

“We actually presented a program for Puerto Rico and we got rejected. We have the solution for Puerto Rico…. and we could’ve had power back in 30 days. And they rejected us. It’s politics, propaganda, and special interests. They didn’t care about the people—if that was the case, they would have allowed us to go in and provide the solution.”

Newsweek notes that 83.8% of Puerto Rico has power currently, months after Hurricane Maria devastated the island back in September. During an interview with the Pentagon last Wednesday, Lieutenant General Todd Semonite, the commanding general of the U.S. Army Corps of Engineers, shared his dissatisfaction:

“If somebody were to say, ‘How come you can’t do this in 25 days?’—we can get 95 percent of this done, in say 6 months, but now we are doing things by helicopter because it is that hard to make some of that happen.” Back in October, the island’s governor, Ricardo Rossello expressed the goal was to restore 95 percent of the island’s power by December 15. This deadline came and went.

Government response to the hurricanes has pretty much universally been condemned as not enough, contributing to the deaths and misery that have gone on in the wake of the hurricanes. Several celebrities have come together to contribute both supplies and fly sick people off the island for treatment. Fat Joe announced his plan to help the island, which still has 3 million people without power, through a video on his Instagram page. In the video, he announces that he is collaborating with Tidal, JAY-Z, New York Governor Andrew Cuomo, and Bronx Borough President Ruben Diaz Jr. to send supplies to Puerto Rico. Jay-Z also provided a plane to send 200,000 pounds worth of goods to Puerto Rico.

Since its creation, Akon Lighting Africa has brought electricity to 14 African countries and has operations established in 11 countries including Guinea, Senegal, Mali, Niger, Benin and Sierra Leone.