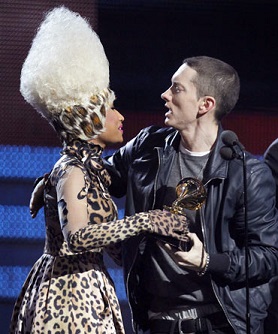 Hip-hop superstars Nicki Minaj and Eminem created social media storm when they teased fans by exchanging flirty messages online after the Anaconda hitmaker posted a clip of herself rapping to her verse on YG’s “Big Bank” track.

On the track Nicki made an apparent reference to dating Eminem, saying, “Told ’em I met Slim Shady, bagged a Em!!!

The clip set the internet ablaze making one fan on Instagram ask whether she and Eminem were dating.
“You dating Eminem???” one of Minaj’s followers asked in the comments to a video of the verse Minaj posted to Instagram.

However, once Eminem got a glimpse of what was going on; he answered her affirmation with “Girl you know it’s true. Fans began to suspect something more might be involved.

“Babe, I thought we were gonna keep it on the low till the wedding,” Minaj jokingly responded to the rapper. “Yikes. I’ll talk to you when I get home.”

Although some fans believed the romance rumors, many were sure the old friends, who collaborated on the 2010 song Roman’s Revenge from Nicki’s debut album Pink Friday, were having a little fun with the gossip.

Both rappers are thought to be single as Nicki parted ways with fellow New York MC Nas after a months-long romance last year. On the other hand, Eminem previously admitted he finds it “tough” to date, turning to apps like Tinder to try and meet new women.

“Since my divorce, I’ve had a few dates, and nothing’s panned out in a way that I wanted to make it public,” Eminem explained to Vulture in December. “Dating’s just not where I’m at lately.”

Over the years, Nicki Minaj has been romantically involved with some high-profile rappers, including Drake, Meek Mill, and Nas. Now, she’s fallen for Eminem.

So far, representatives for neither artists have commented on the alleged relationship, and it’s entirely possible that Minaj is merely trolling her fans. Sheriff Says He Had Little Role In Decision-Making On Troubled Jail!