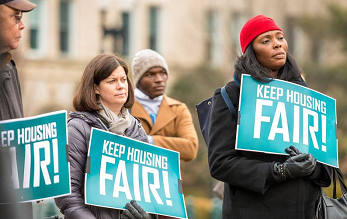 Bank of America and Safeguard Properties Management are being sued by the National Fair Housing Alliance (NFHA), for allegedly failing to conduct routine maintenance on foreclosed homes of predominantly African-American or Latino neighborhoods. In the federal lawsuit by NFHA, the group claims to have inspected 1600 homes owned by the Bank in several American metropolitan areas adding up to 37 in number. The investigation has been in motion since 2009, citing homes that are in dilapidated conditions and causing serious hardships for homeowners in those areas. The suit listed concerns including uncovered and festered pools, uncollected trash and debris, rotting dead animals in yards, damage to steps, graffiti, and more. The complaint also pointing that the areas were posing harm to neighboring homeowners.

To back their claims, the group has attached with it about 35,000 photos to support the mentioned issues. NFHA president and CEO, Lisa Rice said in a statement, “Bank of America and Safeguard’s deplorable and intentional inaction left innocent homeowners exposed to numerous health hazards and personal risks. No one should have to live like this due to Bank of America’s failure to maintain its own properties. NFHA and the co-plaintiffs filed this lawsuit to make sure that these discriminatory practices come to an end and that perpetrators like Bank of America are held responsible for their unjust policies and practices.”

NFHA was founded in 1988, and has been known to be very popular in defending Fair Housing Act in court. They also were at the forefront of suing Ben Carson and the Housing and Urban Development department over Carson’s decision to go against the Obama anti-segregation rule.

Bank of Africa has not been available to comment about the lawsuit, but Safeguard gave a statement to that effect saying, “Safeguard has yet to be served with the complaint. Safeguard neither condones nor tolerates acts of discrimination or business practices that would unfairly target or neglect certain neighborhoods based on location and demographics. Safeguard remains disappointed by the National Fair Housing Alliance’s (NFHA) continued attack on Safeguard with ill-conceived and disingenuous allegations of an extremely serious nature, and we will again vigorously defend against any and all of NFHA’s allegations.”

In the suit, there are other joint plantiffs who claimed to be affected by the conditions of those homes which were right next to where they live. One person said that the homes look so bad that they had attracted squatters and as a result they were attacked by thieves squatting there. They also complained of the infestation that was posing a health risk to them and their families. The fact that this condition has not been addressed for so long to the point that the Bank has to be taken to court, shows the state of their policies as an organization. Some would argue that the Bank has been hesitant in taking action and changing these homes because they affect majorly the people of color – mostly the African American community.