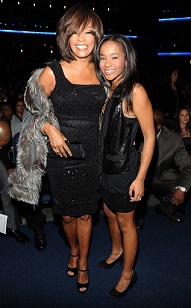 Whitney Houston was an American singer and actress whose first four albums, released between 1985 and 1992, amassed global sales in excess of 86 million copies.

Who Was Whitney Houston?

Born on August 9, 1963, in Newark, New Jersey, Whitney Houston released her debut album at age 22 and scored three No. 1 singles. Whitney (1987) delivered four more No. 1s and earned Houston her first Grammy, with later albums including I’m Your Baby Tonight (1990) and My Love Is Your Love (1998) as well as soundtracks to The Bodyguard (1992) and Waiting to Exhale (1995). With her marriage to singer Bobby Brown in 1992 and ensuing drug use, Houston’s career got off track. She eventually made a comeback with 2009’s I Look to You and also co-starred in the the film remake Sparkle. Houston died from accidental drowning in a hotel on February 11, 2012.

In early 2012, Houston was rumored to be experiencing financial trouble, but she denied this claim. She, in fact, seemed to be poised for a career upswing. Houston worked on a new musical film Sparkle with Jordin Sparks, a remake of the 1976 movie about an all-girl musical group similar to The Supremes. She had reportedly been approached to join the singing competition The X Factor as a judge. Unfortunately, Houston did not live long enough to see the latest comeback reach fruition.

Whitney Houston died at the age of 48 on February 11, 2012, in Los Angeles at a Beverly Hilton hotel where a Grammy party was being held by Clive Davis. Houston had been seen out in the days before her death, including at one of the pre-Grammy parties. According to a report released by the Los Angeles County coroner’s office on March 22, 2012, the official cause of her death was accidental drowning. The effects of heart disease and cocaine found in her system were contributing factors as well. With her passing, the music world lost one of its most legendary stars. Davis once said that Houston “is in the great tradition of great, great singers, whether it’s Lena Horne or Ella Fitzgerald or Sarah Vaughan or Gladys Knight.”

Daughter Bobbi Kristina dealt with much tumult after the death of her mother. She was hospitalized immediately after the passing of Houston due to emotional trauma, but later spoke with Winfrey about returning to her mother’s home and feeling her mother’s presence. Houston left everything to her daughter, but with grandmother Cissy fearing that the fortune could become the target of predators, sister-in-law Pat Houston became the executor of the estate.

Bobbi Kristina had public conflicts with her grandmother over the publishing of the Houston biography Remembering Whitney. In early 2014 she was reported to have been married to Nick Gordon, who had been taken in by Houston during his childhood and raised with Bobbi Kristina, yet later reports stated that they weren’t legally wed. In another confrontation, she made disparaging comments via Twitter about Angela Bassett after the actress/director opted to cast a trained actress in the lead role of a Houston biopic instead of Bobbi Kristina.

On January 31, 2015, nearly three years to the date of her mother’s death, Bobbi Kristina was discovered face down in a bathtub in her Roswell, Georgia home by associate Max Lomas. After being admitted to North Fulton Hospital, she was eventually taken to Emory University Hospital, having been placed into a medically-induced coma.

Bobby Brown and grandmother Cissy visited her bedside amid calls for public support and prayer, with a public candlelight vigil held on February 10th in suburban Atlanta. Bobbi Kristina Brown died on July 26, 2015 at Peachtree Christian Hospice in Duluth, Georgia. She was 22 years old.

Investigations remain ongoing into the circumstances of how the young woman was found and her home situation with Gordon. It was also revealed by the Associated Press via police reports that days before she was hospitalized, Bobbi Kristina had lost control of a jeep she was driving and crashed into another car, with two people receiving medical attention.

‘Whitney Houston’ Album: ‘Saving All My Love for You,’ ‘How Will I Know’

In 1985, Whitney Houston released her debut album Whitney Houston and almost immediately became a smash pop sensation. Over the next year, her hit singles “Saving All My Love for You” and “How Will I Know” helped the album reach the top of the charts, where it stayed for 14 non-consecutive weeks. Houston won a Grammy in 1986 for “Saving All My Love for You”; the award was presented to the singer by her cousin Dionne Warwick.

‘Whitney’ Album: ‘I Wanna Dance With Somebody’

Houston followed the monumental success of her first album with a second release, Whitney, in 1987. That record, too, went platinum many times over and won a Grammy for the single “I Wanna Dance With Somebody (Who Loves Me),” with a successful world tour following. During this time, the singer also appeared at a concert for Nelson Mandela‘s birthday and founded the Whitney Houston Foundation for Children, a nonprofit organization that funds projects to help needy children over the world.

By 1992, Whitney Houston was on top of the world, but her life was about to get very complicated very quickly. That year she married the R&B singer Bobby Brown, formerly of New Edition, after a three-year engagement. At first the marriage was passionate and loving, but things turned sour as the decade progressed and both Brown and Houston battled substance abuse and increasingly erratic behavior, with Houston later alluding to emotional abuse from Brown and domestic violence.

‘The Bodyguard’ Album: ‘I Will Always Love You’

In spite of these growing personal troubles, Houston continued to progress in her career, crossing over successfully into acting in 1992 by starring opposite Kevin Costner in the wildly popular The Bodyguard. With this project, she set a trend for her films to follow: For each movie she also released hit singles, creating sensational record sales for the soundtracks. Her smash single from The Bodyguard, a cover of Dolly Parton‘s 1974 “I Will Always Love You,” proved to be Houston’s biggest hit ever, spending a record-breaking 14 weeks atop the U.S. charts. The soundtrack album went on to win Houston three Grammys, including Album of the Year and Record of the Year. Later in the 1990s, Houston also starred in Waiting to Exhale and The Preacher’s Wife, both accompanied by hit soundtracks as well.

‘My Love Is Your Love’ Album: ‘It’s Not Right But It’s Okay’

In 1998, Houston released My Love Is Your Love, her first non-soundtrack studio album in many years, and it earned her another Grammy for the single “It’s Not Right But It’s Okay.” But the album could not top the chart performance of her previous full-length releases. However, her collaboration with Mariah Carey in the animated film The Prince of Egypt produced a hit single, “When You Believe,” which won an Academy Award.

In the late 1990s and early 2000s, Houston’s increasingly rocky marriage, struggles with drugs and health problems threatened to derail her career. Several concert cancellations and a notorious TV interview with Diane Sawyer in 2002 in which Houston appeared far too thin and in poor health led many to speculate that she was on the verge of a breakdown.

In 2004 Bobby Brown began filming a reality show for Bravo entitled Being Bobby Brown; Houston received substantial airtime. The show aired during the worst years of the couple’s crumbling marriage; drug use, lifestyle excess and bad behavior were all caught on tape and Houston’s reputation sunk to new lows. Houston tried to ignore the controversy, charging ahead with her music by releasing Just Whitney… to combat her detractors, but it did not match the success of her earlier works. In spite of her troubled relationship, Houston was still celebrated as a singer, being named the most-awarded female artist of all time by Guinness World Records in 2006.

Over the next few years, Houston attempted to repair her marriage and to break her drug habit, but after several relapses her mother Cissy had to step in. As Houston explained to Oprah Winfrey in 2009: “[My mother] walks in with the sheriff and she says: ‘I have a court injunction here. You do it my way or we’re not going to do this at all. You’re going to go on TV, and you’re going to retire. And say you’re going to give this up because it’s not worth it.'” Whitney took a break from her career, divorced Bobby Brown in 2007 and won sole custody of their child, Bobbi Kristina Houston Brown.

‘I Look to You’ Album

After almost a decade of struggling with her personal life, Houston seemed to be pulling herself together. She released a new album, I Look To You, in 2009. “The songs themselves will speak to you and you’ll understand where I am and some of the changes I’ve gone through for the better,” Houston told Entertainment Tonight. The recording received a warm welcome from music fans, making it to the top of album charts. Her live shows, however, garnered mixed reviews, with some complaining about the quality of her voice.

Backed by the Whitney Houston estate, the documentary Whitney was released in July 2018, with Houston’s sister-in-law, Pat, serving as executive producer.

“Everyone that has a life has a story. It’s her story and it’s played out in the documentary,” Pat Houston told Good Morning America a few weeks before the film’s release. “She narrated a lot of it herself. It’s just her life and her story as the family would see it, and the friends, who dealt with it every single day.”

The documentary premiered at the Cannes Film Festival. In the doc, it is revealed that her cousin, Dee Dee Warwick, sister of Dionne Warwick, allegedly sexually abused the singer. Houston’s brother told filmmakers he was abused by Dee Dee and believed his sister was too. The documentary also provided insight into Houston’s relationship with drugs—her brother Michael admitted that he gave her marijuana and cocaine as a gift for her 16th birthday—as well as her kinship with fellow pop superstar Michael Jackson.

Born on August 9, 1963 in Newark, New Jersey, Whitney Houston almost seemed destined from birth to become a singer. Her mother Cissy Houston, cousin Dionne Warwick and godmother Aretha Franklin were all legendary figures in American gospel, soul and pop music. Cissy Houston was the choir minister at New Hope Baptist Church, and it was there that a young Whitney got her start. Even as a child, Whitney was able to wow audiences; she later told interviewer Diane Sawyer that a rapturous response from the congregation at New Hope had a powerful effect upon her: “I think I knew then that [my singing ability] was an infectious thing that God had given me.”

By the time she turned 15, Whitney was performing often with her mother and trying to get a record deal of her own. Around the same time, she was discovered by a photographer who was awed by her natural beauty. She soon became an extremely sought-after teen model, one of the first African-American women to appear on the cover of Seventeen magazine. But music remained her true love.

When she was 19, Whitney Houston was discovered in a nightclub by the renowned Clive Davis of Arista Records, who signed her immediately and took the helm of her career as she navigated from gospel to pop stardom. In 1983, Houston made her debut on national television, appearing on The Merv Griffin Show to sing “Home” from the musical The Wiz. She and Davis spent the next two years working on her debut album, finding the best producers and songwriters available to showcase her amazing vocal talent. Martin Lawrence And The Lit AF Tour Hits The Wolstein Stage This Friday! Serena Knew She Had No Chance At French: Mouratoglou!