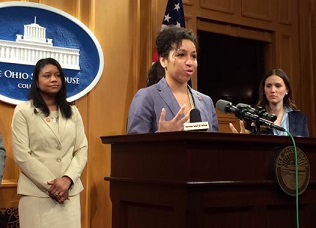 Ohio lawmakers want to overhaul the way the state deals with domestic violence cases by activating a network of support and once a call is made to police.

Lance Mason, a former judge and Ohio legislator from Cleveland, is accused of killing his ex-wife Aisha Fraser in Shaker Heights last November. Mason had a previous conviction after attacking Fraser in 2015. Fraser sustained serious injuries in that attack that required facial reconstruction surgery.

Rep. Janine Boyd (D-Cleveland Heights) says domestic violence tends to be repeated with an escalation of harm. To stop that escalation, Boyd is proposing “Aisha’s Law.”

The bill would create a three-pronged approach.

“Victims of abuse, domestic violence deserve to be heard, believed, and ultimately have the opportunity to pursue justice with the support they need to do just that,” says Boyd.

Fraser’s family came out in support of the proposal and say they’re ready to sit down with lawmakers to advocate for the bill.

Correction: A previous version of this story referred to Aisha Fraser as Lance Mason’s “estranged” wife. She was his ex-wife.