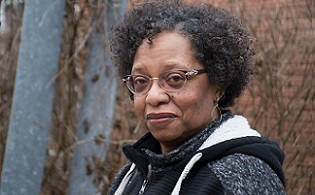 When the $331 million road project known as the Opportunity Corridor is complete, it will weave from I-490 to University Circle, through the East Side neighborhoods sometimes called the “Forgotten Triangle.”

Patches of empty land do stretch throughout the area, but the neighborhoods are also home to many people and businesses. So far, the Ohio Department of Transportation (ODOT) has paid $20.2 million to acquire land there, according to the agency. ODOT’s plans called for taking 64 residential buildings and 25 commercial ones.

Some property owners accepted ODOT’s offers. Others settled with the agency in Cuyahoga County Probate Court. Still others never responded at all, according to court records. It’s possible the title holders died or already moved away.

ideastream spoke with people who lived or worked in the neighborhood about the Opportunity Corridor and their relocation experiences.

Off East 79th Street in Cleveland, at the edge of a wide span of vacant land, a construction crew has been digging a path for the Opportunity Corridor.

When finished, the road will slice through this property — cutting short Arthur Rave’s plans to turn the area into an industrial-scale composting facility.

“Now the opportunity’s gone, and my plans for this area are pretty much gone with it,” Rave said.

Rave and his business partner Victor Anzalone bought the land in 2012 and demolished most of a vacant ironworks here. At the time, roadway planning was underway.

In 2017, ODOT offered the pair about $251,550 for the land. But the two businessmen say they’ve invested millions here.

“There’s no longer any ability to work on this project,” Rave said. “The city and the state told us basically to stop any kind of development or any kind of upgrades, use of the property. So we basically had to lay off our employees.”

Late last year, ODOT reached a $200,000 settlement with Seventh Generation, a company owned by Anzalone that holds the title to some of the property in the area.

But Rave’s company, Opal Industrial, is still fighting in court. A trial date is set for July this year.

After Anita Lillard earned an associate degree in business, she wanted to put her new knowledge to work, she said.

So she opened Baby Boy Doggs, a small hot dog cart operation with its kitchen and headquarters on East 105th Street. Her 12-year-old son came up with the name, she said.

“I was the owner, the operator, the manager, the cook,” Lillard said with a laugh.

ODOT planned to widen East 105th Street for the Opportunity Corridor and Baby Boy Doggs stood in the way. The state offered Lillard $74,000 for the land in 2014, according to court records. She hired an attorney and settled for $100,000 later that year.

“I was in a very uncomfortable situation, so I took it just on the strength because I had to continue living,” she said.

More than a tenth of that sum — about $13,451 — went to Cleveland’s economic development department, which had taken out a lien on Lillard’s business in 2013, according to court records.

Lillard ended up homeless for a time, she said. After paying legal fees, getting housing and buying a car with the settlement, Lillard said she didn’t have enough money to go back into the food business.

“Not enough to restart another business, compensate the creditors, actually make me whole again,” she said.

She moved to Mentor. Now she works as a nursing assistant, hopes to go to nursing school and dreams of starting a nonprofit.

“The path I’m taking now is rejuvenating, to know that I’m starting something totally new and different, growing in a different field,” she said. “And hopefully, God willing, I can make this a better situation than what I just got out of.”

Holding Out For A Better Deal — And A Garden

Joyce Hairston, a member of the Opportunity Corridor’s steering committee, lived at the other end of the project. ODOT planned to take her home, along with those of her Slavic Village neighbors, in order to connect the corridor with I-490 at East 55th Street.

Relocating from her home of 20 years was stressful, she said.

“It’s one thing if you decide that you want to go,” Hairston said. “But it’s another thing for somebody to knock on your door and say, ‘Hey, you got to go.’”

Prices in the neighborhood were at rock bottom after the foreclosure crisis. Hairston’s home lost 42 percent of its value between 2008 and 2012, according to property records.

The state offered her $13,200 in October 2014, according to a letter obtained through a public records request. Hairston described the offer as an “insult.” She said it didn’t allow her to move into a comparable home, one that had something very important to her: a garden.

Hairston called the city, which sent her to the Legal Aid Society of Greater Cleveland, she said. With the legal help, she moved into a ranch-style home in Akron with enough garden space for her herbs and greens.

“If I had to hold up the Opportunity Corridor process, I was not going to move until I felt I was being treated fairly,” she said.

‘Help Me Get Out Of This Hole’

When the Opportunity Corridor is complete, it will pass less than 500 feet from A.J. Gilliam’s home in the Buckeye neighborhood. Demolition crews have already brought down several old industrial buildings at the end of his street.

In Gilliam’s opinion, the corridor is being built for one reason.

“To expedite people that are working in University Circle to the highway,” he said. “It’s just that simple.”

Even so, he was eager to share ideas for new development he’d like to see along the road. Opportunity Corridor commuters could use a place to buy coffee, he said, or a car wash.

But Gilliam, who delivers home oxygen machines for a living, didn’t expect the project will open new opportunities for him.

Getting “out of this hole” for Gilliam means buying his house and letting him move to a newer and nicer home.

“Anything that they do, build over here, and do what they do, is fine with me,” he said. “As long as they come on over here and get my house.”

A New Image And A New Road

As part of its years-long planning process for the corridor, ODOT released a study in April 2013 called the “environmental justice technical memorandum.” The paper examines construction’s potential impact on the neighborhood.

Building the Opportunity Corridor would have “disproportionately negative effects to low-income and minority populations,” according that memo.

“That’s not necessarily the whole picture,” she said. “We want to make sure that this project has benefits outside of transportation, and more than transportation. So we want to benefit the community.”

And what is that benefit? Jobs, she said. ODOT agreed to give 20 percent of the construction work to Cleveland residents. It exceeded that goal in the first two phases of the project, according to numbers provided by the agency. Then came an Ohio Supreme Court ruling neutralizing Cleveland’s local hiring law.

Meanwhile, the city of Cleveland planning a new shape for the area.

A 2013 planning document imagined logistics firms, warehouses and light industry setting up shop along the road. More recently, city planners have drawn up ideas for development along East 79th Street and in the Fairfax neighborhood. Now, the city plans to build a new police headquarters near the project.

Last year, the city hired Neoscape, a Boston-based branding firm, for $140,000 to help attract new occupants to this new road.