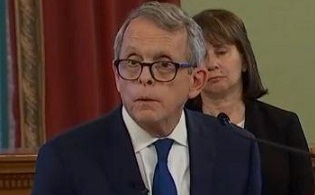 Gov. Mike DeWine has closed all the state’s bars and dine-in restaurants until further notice, effective at  9 p.m. Sunday. Restaurants will still be allowed to stay open for carry out and delivery.

Ohio is the first state to impose such restrictions, as the state attempts to slow the spread of the COVID-19 coronavirus. Ohio’s Department of Health reports 37 confirmed cases of the disease, as of Sunday.

DeWine acknowledged the order is going to hurt establishments and service industry workers greatly—particularly small businesses—and promises his administration will work to mitigate those effects.

“I can’t tell you how sorry I am,” DeWine said. “Our goal is for everyone to get through this.”

DeWine cited St. Patrick’s Day, which is coming in two days on Tuesday, as a central factor for the order. He said it’s critical to break up groups and create distance between people, or else the health care system won’t be able to keep up.

“This is a crucial time,” he said. “Delay means people will die.”

No Ohioans have died so far from COVID-19, according to the state health department. The state is waiting for test results on 361 residents, and 140 tests have come back negative.

The Ohio Chamber of Commerce applauded DeWine’s order in a statement Sunday.

“We support Governor DeWine’s decision because we believe taking steps now to confront the Coronavirus will ultimately benefit our state by limiting the spread of the disease and enable Ohio to get back to normal sooner,” said president and CEO Andrew Doehrel.

Lt. Gov. Jon Husted said that bar and restaurant owners can return unopened high-proof liquor they may have purchased in the last month for the holiday and other upcoming festivities.

Husted also said there’s likely an order coming from the administration to provide unemployment compensation for workers who don’t have paid leave benefits. People who are sick or quarantined will be exempt from state requirements that they must be looking for work, and the state will also waive the one-week delay in payments from the time of job loss.

Ohio’s Department of Jobs and Family Services also plans to waive certain requirements on employers. And the state hopes to qualify small businesses and non-profits for low-interest loans of up to $2 million from the Small Business Administration

In the last week, Ohio has imposed an increasing number of restrictions on businesses and social activities, most prominently banning most “mass gatherings” of more than 100 people and suspending all schools for three weeks.

On Sunday, DeWine said that three weeks likely won’t be long enough to close schools, and that the order may be extended. He also advised parents to make arrangements for when the state inevitably closes child care centers. Daycares have so far been exempt from school closings, but DeWine has consistently said that they would not likely remain open.

One event that Ohio won’t shut down is the upcoming primary election on March 17. DeWine said the state has been early voting for four weeks, and that interrupting an election in the middle poses serious problems.

“People have the ability to separate at the elections,” DeWine explained. “It is not a mass gathering.”

This is a developing story and will be updated.