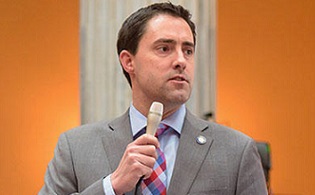 Ohio’s rescheduled primary is set to wrap up April 28. It was originally supposed to happen March 17, but the coronavirus pandemic led to the last-minute cancellation of in-person voting. The question that still has many people confused is: If you hadn’t already participated through early voting, how do you follow through now?

We spoke with the state’s top election official, Secretary of State Frank LaRose, who says his primary mission these days is making sure people know what they need to know to place their votes.

The first step is to request an absentee ballot. LaRose says there are three simple ways:

“We’ve also partnered with community groups like the League of Women Voters, the NAACP. Many newspapers are printing it so people can rip it right out of the page. We’re working with the grocers’ association to put these request forms out in grocery stores,” he said.

“I had proposed a different plan. I had asked the legislature to give us a few weeks along and to give me permission to mail out these absentee requests along with a pre-paid envelope to every registered voter in Ohio,” he said. “Unfortunately, they chose a different path.” (The details of the changes can be found on pages 342-346 of House Bill 197.)

As for in-person voting,  it is only available to disabled Ohioans who can’t use vote by mail and for those who don’t have a home address, like the homeless.

The Secretary of State says the unofficial results will be available the night of April 28. They will tabulate all the ballots that have come in as of this point. In most cases, he says those results will indicate the winners. But in tight races, especially at the local level, as more mail comes in, those results could change. The law allows a ten-day period for those votes to come in.

The League of Women Voters, the ACLU of Ohio and others sued the Secretary of State claiming that the absence of in-person voting was a violation of the 14th amendment and the National Voter Registration Act. A federal judge denied the suit April 3. The plaintiffs claimed the change in the primary and the judge’s decision disenfranchises voters. LaRose recognizes the groups as “having a great history of advocating for voters’ rights.” He asserts he shared a lot of those same concerns. The bottom line from LaRose is that his office is doing everything it can under the bi-partisan bill that was passed to make sure the primary is carried out the best way that it can be.

“Things are different. This is not a normal election. Certainly the way that this election is being conducted would not, in my opinion, be sufficient in a normal time, but these are not normal times,” he said. And he said that’s why his office is partnering with every group it can to make sure that every Ohioan knows how to take advantage of vote by mail.

LaRose stressed that voter fraud is extremely rare and is so because people take it seriously. He said the current vote-by-mail system in Ohio has been in use for decades, and there are many safeguards. He gets this question all the time about whether vote by mail is open to fraud. He said there’s a small chance of that, but when they find it, they prosecute it as a felony, but he stated that it is very secure. He added that, at the county level, the vote is overseen by boards of elections by both Republicans and Democrats.

LaRose believes online voting will happen at some point, but that’s in the future. He expects to see it in our lifetime.

“I know that the technology exists using blockchain or a variety of other things,” he said.

However, he calls it a more complex question than many people realize.

“You have to authenticate that the person… is who they say they are, a biometric or some other form of identification.”

The next challenge is ensuring that voters can be certain of being able to cast their ballot in secret, so it’s not being tracked.

Even with the technology, LaRose said there also has to be public acceptance.

“Until you have competence and confidence, you can’t move forward,” he said.