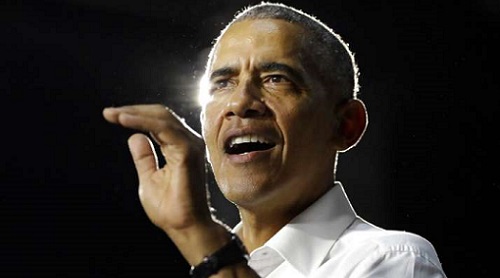 With Joe Biden on the ballot, so is the legacy of Barack Obama, and it appears we’re about to see a throwdown between the last president and the current one — and their polar opposite worldviews.

Amid criticism of his handling of the coronavirus pandemic, President Trump has been falsely laying blame on Obama for leaving the “cupboard bare” when it comes to the national stockpile of emergency medical supplies and equipment.

And lately, Trump and conservatives have been running with allegations of potentially criminal activity by Obama administration officials for their handling of surveillance that later led to the investigation and guilty plea of Michael Flynn, Trump’s three-week national security adviser. (The Department of Justice now wants to drop its case against Flynn.)

In the past week, Trump has tweeted “Obamagate” (on its own, as a retweet or as a hashtag) 18 times. Three times, he’s tweeted simply “Obamagate!” with nothing else.

Neither Trump nor White House officials have been able to identify a specific crime, but it sure helps fire up the base.

Obama, for his part, seemed to reply with one word of his own Thursday: “Vote.”

And then, on Saturday, he had more words during two virtual commencement addresses.

“[T]his pandemic has fully, finally torn back the curtain on the idea that so many folks in charge know what they’re doing,” Obama told graduates of historically black colleges and universities. “A lot of them aren’t even pretending to be in charge.”

Then, when speaking to graduating high school students, he said: “Do what you think is right. Doing what feels good, what’s convenient, what’s easy — that’s how little kids think. Unfortunately, a lot of so-called grownups, including some with fancy titles and important jobs, still think that way — which is why things are so screwed up.”

And a week earlier, when talking to former officials from his administration, leaked audio revealed that Obama called Trump’s handling of the coronavirus an “absolute chaotic disaster” and an example of what happens when a “what’s in it for me” mindset “is operationalized in our government.”

Pressed about Obama’s remarks Sunday, Trump said he hadn’t heard them, but noted, “Look, he was an incompetent president, that’s all I can say, grossly incompetent.”

Welcome to the 2020 presidential campaign. Reelections are always a referendum on the sitting president. But with Biden, Obama’s vice president, at the top of the Democratic ticket, it’s somewhat of a referendum on Obama, too.

And there’s reason for Trump to want — or even need — to try and take Obama down a few pegs. Currently, Obama is among the most popular politicians in the country — and one of the highest-polling political figures (besides his wife, Michelle.)

It’s a clear and stark choice offered up to voters — and one Trump seems to want front and center. He even tweeted at Republican Senate Judiciary Chair Lindsey Graham, who says he wants to hold hearings on the Flynn case, to call Obama to testify.

“Do it @LindseyGrahamSC, just do it,” Trump tweeted. “No more Mr. Nice Guy.”

Graham responded, telling reporters he thinks that would “be a bad precedent” to compel a former president to testify and would “open up a can of worms.”