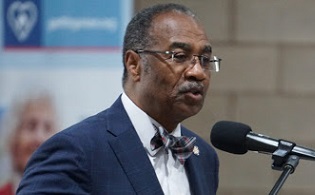 Governor Mike DeWine issued a statement Tuesday evening saying he was “very disturbed” to learn of the threats.

“It is wrong. It is reprehensible, and it is unconscionable to threaten someone with violence for doing the job they were elected to do,” he said. “Simply put: hatred has no place in Ohio, and violence will not be tolerated.”

“We condemn any threats of physical harm, or any other harm, against these public servants or any other Ohioans. Let us be absolutely clear: it is never acceptable to intimidate or threaten a public official, and it is a felony to do so. We have asked law enforcement to fully investigate this occurrence and prosecute the offenders to the fullest extent of the law,” the statement reads. “We ask all Ohioans to join us in calling for civility and compassion, while condemning the hatred that seeks to divide us.”