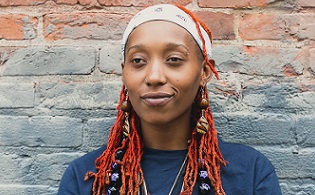 Protesters took to the streets of Downtown Cincinnati for a third time on Sunday, all in honor of George Floyd, the African American Minneapolis man killed by a white police officer last week.

The “Be Safe, Be Heard Rally for Justice” started in Mount Auburn’s Inwood Park at around 2:30 p.m. with speakers and artists as well as representatives from the local chapter of the Democratic Socialists of America. Within the largely young crowd, WVXU spotted Councilman Jeff Pastor; Councilman P.G. Sittenfeld also tweeted that he was in attendance.

Artist and activist Siri Imani told the crowd all local communities have activists, and it is not just when someone dies that people should support them.

“We have a big hand in how this city runs, the way this city operates,” she said. “The way this city decides that they want to treat us, we can’t dictate that. We’ve seen it once and we can see it many more times if we chose to, but it comes with numbers like this – it comes with … all of us coming together, not just today but every single day to figure out what we need to do on our personal roads.”

For Darryl Thompson, it was the first time he had attended a demonstration. Watching the more than eight minute-long video of Floyd’s death, where he can repeatedly be heard saying “Please,” “I don’t want to die” and “I can’t breathe,” was what compelled him to act.

As he spoke to WVXU, he held a sign with the words “I can’t breathe.”

“To watch all eight minutes of his dying life, I couldn’t tolerate it,” he said. “And that caused me to think back to every other African American who’s lost their lives senselessly because they were black.”

Jessica Merck, a mother of three children, was holding a sign that said “Be the change.”

“I’m tired of having to explain why people are so angry,” she said. “I’m tired of seeing the police brutality. I have mixed children. I don’t want them living in a world like this. This is hurtful for me, I’ve been in tears for the last five days. We need to do something about it.”

Organizers emphasized safety as a priority before leading the crowd out of the park and toward Downtown, where they passed Cincinnati Police District 1, City Hall and the Hamilton County Courthouse. Organizers said EMTs marked with red crosses on their clothing would be present, and volunteers could regularly be seen passing out water and granola bars.

During the march, things remained calm, although there was an altercation between police and marchers on East 12th Street between Main and Walnut at around 6 p.m. Demonstrators told WVXU police on motorcycles had “pushed” into the crowd. Some demonstrators rushed back to where the incident was taking place, and that’s when police and SWAT cars, as well as highway patrol, raced to the area. After a few minutes, loud pops could be heard, and some in the crowd fled.

At 6:45 p.m., organizers of Sunday’s rally asked in a now-deleted Facebook post for people to head home, saying the event was over and that cops and outside agitators were getting aggressive.

Earlier in the day, Mayor John Cranley issued a curfew of 9 p.m. for Sunday – one hour earlier than the one he had set for Saturday, the day after rioters broke a window at the Hamilton County Justice Center and looted and vandalized some downtown stores.

The daylong protests on Saturday extended into the evening and well beyond the 10 p.m. curfew.