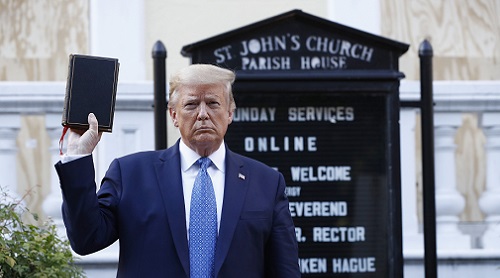 President Archie Bunker (but more racist and less likable) heard all our jokes about him hiding as police clashed with protesters Sunday night, so what did he do? He did the only respectable thing that a punk-ass president would do: he had peaceful protesters tear-gassed outside the White House so that he could walk the streets for a photo-op to prove that the Antichrist can hold a Bible in front of a church.

According to the Washington Post, Trump “began mulling a visit to St. John’s Episcopal Church on Monday morning, after spending the night devouring cable news coverage of protests across the country, including in front of the White House.”

The church was damaged during protests over the death of Georg Floyd, an unarmed black man who died while in Minneapolis police custody. Trump was desperate to show that he was the tough guy he’s always claimed to be. For Trump, the appearance of looking tough, despite a long history of him never showing up for anything remotely close to confrontation (he’s lovingly called President Bone Spurs for a reason), is all that matters. He also wanted to show the world that Washington, D.C., was under control.

Trump was set to speak to reporters in the Rose Garden, and maybe he thought that the flash-bang shells and screams of protesters being hit with rubber bullets wouldn’t be heard in the Rose Garden, but all of the reporters gathered at the White House immediately began hitting social media to see what was happening. And while the president was in front of them claiming that he was an ally of peaceful protesters, the police force was busy doing his dirty work.

What no one knew, including officials of the St. John’s Episcopal Church, which Trump was soon to visit, is that the leader of the free world was on his way.

The good news is this: Trump is scrambling. He’s been troubled by months of coronavirus deaths and his administration’s botched attempts at handling the global pandemic. He’s now facing America’s cancer: systemic racism and black death at the hands of the police with a presidential election right around the corner. His poll numbers are falling faster than Sen. Lindsey Graham’s man panties when he walks into the presidential bedroom, and Trump is looking for a way to bolster favor with his supporters, who are getting tired of his ineptitude.

“We long ago lost sight of normal, but this was a singularly immoral act,” Brendan Buck, a longtime former Hill aide who is now a Republican operative, told the Post. “The president used force against American citizens, not to protect property, but to soothe his own insecurities. We will all move on to the next outrage, but this was a true abuse of power and should not be forgotten.”

The president didn’t just use force on peaceful protesters; he’s threatened military action against American citizens and claimed that if governors won’t bring the hammer down on protesters, he would.

Trump said from the Rose Garden he was committed to upholding laws and mobilizing military resources to end nationwide looting.

“My first and highest duty as president is to defend our great country and the American people,” Trump said. “I swore an oath to uphold the laws of our nation and that is exactly what I will do.”

In striking terms, Trump said he would use his entire presidential prerogative — including threatening to invoke a rarely used law dating back to 1807 — to ensure violent protests end, declaring he would deploy “thousands and thousands of heavily armed soldiers, military personnel and law enforcement officers” to bring order.

Trump went to the bunker.

That’s what all of this is about. Trump isn’t mad about going to the bunker—
he’s mad that everyone knows he went to the bunker, and so America has to pay for the president appearing to be a punk. And if we know anything about Trump, it’s that he’s only into appearances. It’s why he used to pretend to be his own press person just so he could leak fake stories about his life to the news. It’s why he began claiming he owned the buildings that just bore his name. He is the framework that Kylie Jenner followed on how to dupe Forbes into putting her on the billionaire list. And, his most famous trick of all: how he convinced a bunch of cowboys and good ole folks that he’s just like them when he secretly hates their guts—or as Howard Stern put it, “He wouldn’t even let them in a fucking hotel. He’d be disgusted by them. Go to Mar-a-Lago, see if there’s any people who look like you.”

Senior Editor @ The Root, boxes outside my weight class, when they go low, you go lower.