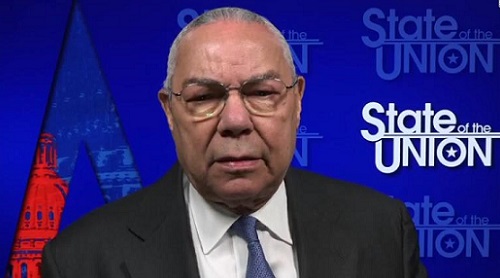 After a week in which President Donald Trump threatened to use military force against protesters, Colin Powell and other retired military leaders blasted the commander-in-chief for taking steps they say will harm the relationship between the military and U.S. citizens.

Powell, who served as Secretary of State under former President George W. Bush and was previously chairman of the Joint Chiefs of Staff, told CNN’s “State of the Union” that Trump is “drifting” away from the Constitution and said he’s a habitual liar.

Powell, who did not vote for Trump in 2016, said he would vote for Joe Biden, the presumptive Democratic presidential nominee, this fall.

Trump responded to Powell on Twitter, calling him “a real stiff who was very responsible for getting us into the disastrous Middle East Wars” and that Powell “just announced he will be voting for another stiff, Sleepy Joe Biden.”

“This isn’t about politics,” Biden tweeted Sunday afternoon. “This is about the future of our country. Grateful for your support, Secretary Powell.”

Echoing Trump’s former Defense Secretary James Mattis, Powell said he agreed that Trump is the first president in his lifetime who is not trying to unite the country. Powell said the protests have shown him the country is at “a turning point.”

“The Republican party, the president thought they were immune, they can say anything they wanted,” Powell said. “And even more troubling, the Congress would just sit there and not in any way resist what the president is doing.”

“The one word I have to use with respect to what he’s been doing for the last several years is the word I would never have used before, never would have used with any of the four presidents I worked for, he lies,” Powell added. “He lies about things. And he gets away with it because people will not hold him accountable.”

Their commentary came after Mattis last Wednesday slammed Trump’s response to the protests over George Floyd‘s death, writing in The Atlantic that the president “tries to divide us” while calling his “bizarre photo op” in front of St. John’s Episcopal Church “an abuse of executive authority.” Mattis also compared Trump’s response to Nazi tactics.

The stinging commentary came after Monday night’s federal show of force to clear protesters from the front of the White House. After they were cleared, Trump walked across Lafayette Square with top military leadership and others to pose for a picture with a Bible in front of the church, which had sustained fire damage as a result of rioting the night before. The photo opportunity came minutes after Trump announced he was prepared to call in the military to deal with unruly protesters around the country.

Trump blasted Mattis in response, calling him “the world’s most overrated general.”

“It seems to me (the protests) are all about…trying to allow people to actually fulfill their potential, one of the great promises of living in this country,” Dempsey said. “So we absolutely have to be very careful about how the military is used in that circumstance.”

On NBC’s “Meet the Press,” retired Navy Adm. James Stavridis said the protests aren’t “a battlespace to be dominated,'” pointing to comments from Trump and his administration. And on “Fox News Sunday,” retired Navy Adm. Michael Mullen, also a former Joint Chiefs of Staff chairman, said the military “should never be called to fight our own people as enemies of the state,” adding, “We have a military to fight our enemies, not our own people.”

Elsewhere, Attorney General William Barr told CBS’s “Face the Nation,” that he, Defense Secretary Mark Esper and Gen. Mark Milley, chairman of the Joint Chiefs of Staff, agreed that active duty military should only be used “as a last resort and that we didn’t think we would need them.”

Also on “Face the Nation,” Condoleeza Rice, who served as secretary of state and national security adviser under Bush, said she would “absolutely advise against” using active duty military in response to the protests, saying the National Guard is trained for such instances.