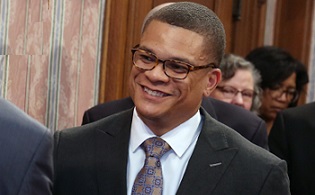 Karrie Howard is the City of Cleveland’s new director of public safety.

He was sworn in last Friday by Mayor Frank Jackson during a brief ceremony at City Hall, which was also broadcast on the city’s Facebook account.

Howard rose quickly to his new position. He became the city’s chief prosecutor, reporting to the law director, in 2018.

He was in that role when the city prosecutor’s office declined to press charges against Jackson’s grandson, who was accused of assault. The county prosecutor later filed charges, which led to a guilty plea and probation.

In March, Howard became an assistant director of public safety. He has sought to be a unifier in a time of protests against police.

“I hear you BLM [Black Lives Matter]. I hear the LGBTQ-plus community. I hear the 100 Black Men of America, the NAACP, I hear Black Greek Organizations,” Howard said. “I hear all the voices of the Cleveland community as well as members of the police, fire and EMS divisions that make up the Department of Public Safety.”

Howard did not go into details at his swearing in about changes he will seek to make.

He takes over for Michael McGrath, who first joined the Cleveland Division of Police in 1981, worked his way up to chief of police and resigned last week after six years as public saftey director.