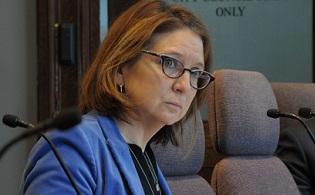 For 103 new patients, initial symptoms trace back to the third week of June, according to a city health department presentation. That was a jump over the prior two weeks, but below symptom onset numbers for earlier in May.

The city reported 75 new cases on Sunday, the biggest daily increase in Cleveland’s case count to date. Health Director Merle Gordon said those numbers were not reflected in her presentation to city council.

Contact tracers have asked COVID-19 patients whether they attended big events or rallies around the time of Cleveland’s May 30 demonstrations. But that doesn’t seem to be a trend among Cleveland’s new cases, Gordon said.

“What we’re starting to see right now, which is a more concerning trend, is how many people have indicated that they have traveled,” Gordon said. “Perhaps traveled to a beach, eaten out, a lot of nightclubs have reopened, so people tend to relax the wearing of face coverings or how close they’re getting to others.”

Cleveland has seen an uptick in cases among younger people, Gordon said. About 39 percent of the city’s COVID-19 cases are in 20- to 40-year-olds.

That trend extends across the state, with more than one-third of recent new cases in Ohio coming from the 20- to 39-year-old age group, said Dr. Michael Dohn, medical director for the Dayton and Montgomery County public health system, at Gov. Mike DeWine’s Monday coronavirus briefing.

Deaths, locally and elsewhere, remain mostly concentrated among older adults. More than 70 percent of those in Cleveland who died with COVID-19 were 70 or older.

The city’s numbers also show a racial disparity in cases. Nearly 64 percent of Cleveland COVID-19 patients are Black, although African Americans make up around half the city’s population.

As of Sunday, Cleveland had recorded 2,245 COVID-19 cases, according to the mayor’s office and 75 deaths from the virus.

“Each of these deaths are very, very emotional to us,” Gordon told council, “and we do light a candle every time we report our deaths.”