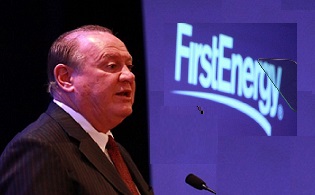 During a FirstEnergy earnings call Friday, just days after federal agents subpoenaed the company as part of a racketeering investigation, CEO Chuck Jones said the company is cooperating but did nothing wrong.

“I believe that FirstEnergy acted properly in this matter and we intend to cooperate fully in the investigation,” Jones said during the previously scheduled call. “This is a serious and disturbing situation. Ethical behavior and upholding the highest standards of conduct are foundational values for the entire FirstEnergy family, and me personally,” says Jones.

Company officials look forward to sharing with investigators what they did to support the law and why, he said.

“But let me be clear. At no point does our support for nuclear plants in Ohio interfere or supersede our ethical obligations to conduct our business properly,” Jones said.

According to the federal charges, millions of dollars went into a dark money organization that ended up benefitting Ohio House Speaker Larry Householder (R-Glenford).

The federal investigation accuses Householder of profiting from a bribery scheme, starting with money coming from companies widely believed to be FirstEnergy and its subsidiaries.

The case laid out by U.S. district attorneys this week says in return for the cash, Householder pushed a law that accomplished several priorities for FirstEnergy, including a bailout for two unprofitable nuclear plants owned by former subsidiary FirstEnergy Solutions, now Energy Harbor.

Investigators say money flowed from companies that fit the description of FirstEnergy and FirstEnergy Solutions, into a 501(c)(4) named Generation Now. Generation Now pumped millions of dollars into a campaign to earn support from lawmakers for HB6 and the subsequent campaign against a referendum effort in the fall of 2019.

Both Republican and Democratic lawmakers are now proposing a repeal to the bailout.