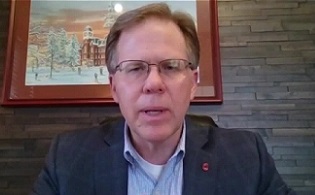 Bars and restaurants around Ohio poured their last drinks at 10 p.m. on Friday, and they must close their doors an hour later as state officials try to slow the spread of the coronavirus.

The leader of the Ohio Restaurant Association says the move could come close to devastating bars and restaurants that depend on late-night business from alcohol sales.

“If you’re a business that is more late-night and more dependent on alcohol, clearly, this is going to be for many of them devastating might be just a little bit of an overstatement, but it’s pretty close,” Ohio Restaurant Association President John Barker said.

The measure to close bars and restaurants early was proposed by Ohio Gov. Mike DeWine on Thursday and approved by the Ohio Liquor Control Commission on Friday.

DeWine said that most bars are following health guidelines, however, he singled out some establishments around the state that investigators found were not practicing social distancing and had dancing in close quarters.

The restaurant association recommended ending sales of alcohol at midnight to limit late-night gatherings,  but not hamper restaurants and bars that are following the state’s guidelines around social distancing and sanitizing. Barker said more enforcement of the outliers that are not enforcing social distancing could correct the problem.

“The vast majority of establishments are doing it the right way,” he said. “It is outliers that are getting the headlines in these photos that we all see and things like that. And so, what we have said and our recommendations is for more enforcement on the outliers.”

This week, Columbus City Council approved an ordinance that would shut down bars and restaurants at 10 p.m. However, after a lawsuit was filed by several local establishments, a Franklin County judge issued a temporary restraining order blocking the measure from taking effect for 14 days.

Barker said he would not be surprised if a lawsuit is filed to stop the state’s order.

“This is their livelihoods and they feel a sense of responsibility to the community and to all their employees that work for them. And so when these things are happening and they think maybe it’s not completely fair that maybe this industry is being singled out a bit. Of course, they’re going to respond,” he said.