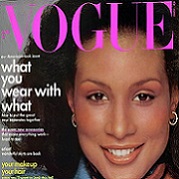 In case you forgot, supermodel Beverly Johnson is a G—one of the originals, in fact. And the woman who walked so Naomi can strut is far from finished wielding her decades-long influence on fashion, as evidenced by her recent revelations about her groundbreaking career, which included being the first Black model to land the cover of Vogue in 1974.

As W magazine notes and recent concessions confirm, while the cover made history, it wasn’t the harbinger of change many hoped it would be.

In 1974, Beverly Johnson did what the modeling industry legend Eileen Ford had considered impossible: She appeared on the cover of Vogue. It was a milestone, but hardly a breakthrough for Black models—including Johnson herself. Cosmetic companies still turned her down, describing their brands as aesthetically white and blonde. Liquor and cigarette ads, often marketed in predominantly Black neighborhoods like Harlem, were still the only real moneymakers. And with no Black hair or makeup artists on set, Johnson had to turn to DIY solutions like using Vaseline to slick back her hair.

“That Vogue cover made me a legend. At the same time, I knew I was [a] token,” Johnson recently told People for its Voices from the Fight Against Racism series. “What you have to realize is that I was the only Black girl on every shoot.”

To prove her point, she recounted a humiliating incident during one of those aforementioned shoots.

Once in the 1970s, we were at a five-star hotel. I got into the pool. And all of a sudden, the editor came out and made everybody get out. They drained the pool. Twenty years later, one of the models told me it was because of me. But I had blocked it out. In order to survive, I would make myself not react. Like Teflon.

Johnson no doubt had that Teflon armor in place when Vogue reportedly refused to invite its first Black cover model to its 100th-anniversary celebration in 1992, according to Johnson’s former publicist (h/t Page Six). But as longtime Vogue editor-in-chief and Condé Nast Artistic Director Anna Wintour sheepishly admitted to sidelining Black talent and representation during her ongoing tenure, Johnson finally got to say her piece in a June op-ed for the Washington Post.

My debut was meant to usher in a current of change in the fashion industry,” she wrote. “After my 1974 cover, I shot hundreds more, including two more covers for Vogue. I was the first Black model on the cover of French Elle. But my race limited me to significantly lower compensation than my white peers. The industry was slow to include other Black people in other aspects of the fashion and beauty industry. I was reprimanded for requesting black photographers, makeup artists and hairstylists for photoshoots. Silence on race was then—and still is—the cost of admission to the fashion industry’s top echelons” she later added.

Now 67 and newly engaged, Johnson clearly has no intention of being silent as the chorus for the movement for Black lives rises across industries. After all, as she noted in the Post, it’s a battle she’s been waging for a half-century.

“We’re in a business that is supposed to be beautiful, but underneath there is an ugly systematic racism where the industry takes Black culture and trends for their own, pirating our culture, without giving anything back,” Johnson told People. “All these brands are saying Black Lives Matter. Let me see how many black lives matter. How many Black people have you employed?”

Maiysha Kai is Managing Editor of The Glow Up, an avid eyeshadow enthusiast and always her own muse. Minneapolis born, Chicago bred, New York built. Nuance is her superpower.