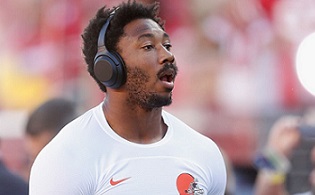 Cleveland’s three major sports franchises — the Cavaliers, the Browns and the Indians — are forming an alliance to address social injustice.

The move comes after the NBA postseason was indefinitely suspended on Wednesday after players boycotted future playoff games. The players said they wanted concrete action by the league and its owners on combating social injustice after the police-related shooting of Jacob Blake in Wisconsin. Teams in the WNBA, MLB and MLS also took part in the boycott this week.

The Cleveland sports alliance said its goal is to improve relationships between law enforcement and its citizens, encourage nonpartisan voting activity and increase educational opportunities. The key figures from each team taking part in the alliance include:

“We have an extraordinary opportunity to make a lasting impact on society and the Cavaliers are committed to help bring about change,” Altman said. “The social and economic disparity in our community reveals some ugly truths, and Coach Bickerstaff and I are honored to be at the table to address these issues with such a prominent group of our peers. We never take for granted our place in the fabric of Cleveland and hopefully our coming together inspires others to join us.”

The initial goals of the Cleveland alliance will focus on voting. However, the teams said they would use their platforms to engage civic leaders on important issues.

“We recognize the profound impact that professional sports have on the greater Cleveland community, and the enormous responsibility that comes with such a platform,” said Antonetti. “While the circumstances that highlighted the need for this partnership are disheartening, Tito, Mike and I are excited by the opportunity to work with such a thoughtful and diverse group of leaders to identify opportunities to be a positive force for change. There is a lot of work to do, and we believe that this partnership will serve to amplify our collective impact.”