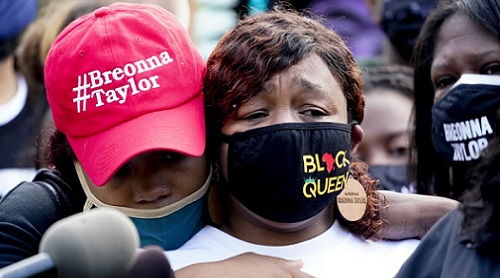 Breonna Taylor’s family is requesting the grand jury release the transcripts from the court proceedings!

Breonna Taylor’s family is fighting back against the decision to not charge Louisville police officers with her death. The family attorney is requesting that Kentucky Attorney General Daniel Cameron release the grand jury’s transcripts from the court proceedings.

Taylor’s mother, Tamika Palmer, offered a chilling message during a press conference on Friday. It was relayed by White House correspondent Yamiche Alcindor on Twitter.

“I was reassured last Wednesday of why I have no faith in the legal system. The police and law were not made to protect us black and brown women. I knew Daniel Cameron would never do his job. The system as a whole has failed Breonna.”

As reported by theGrio, the grand jury decided to charge former officer Brett Hankison with first-degree wanton endangerment charges because the shots he fired could have potentially injured others in the apartment complex where Taylor lived. No officer was charged in her actual death.

“Breonna Taylor’s entire family is heartbroken … and confused and bewildered, just like all of us, as to what did Kentucky Attorney General Daniel Cameron present to the grand jury,” said the family attorney Benjamin Crump at the news conference.

He continued, “Did he present any evidence on Breonna Taylor’s behalf, or did he make a unilateral decision to put his thumb on the scales of justice to help try to exonerate and justify (the killing) by these police officers?”

“Release the transcript!” he demanded as the crowd repeated.

The FBI is investigating Taylor’s murder.

After the conference, Crump took to social media to address the grand jury decision and Cameron.

“Grand Jury and ‪@KYOAG may have denied ‪#JusticeforBreonnaTaylor, but their decision cannot take away Bre’s legacy as a loving, vibrant young Black woman who served on the front lines of the COVID pandemic. We hope the FBI investigation finally gets justice for Bre and her family,” he tweeted.