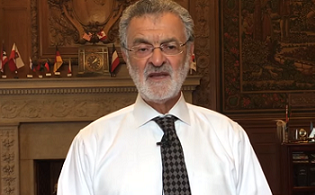 Carrying Black Lives Matter banners and calling for President Donald Trump’s defeat in November, more than 1,000 demonstrators gathered at Wade Lagoon and marched through Cleveland’s University Circle neighborhood ahead of the first presidential debate of the 2020 general election.

Just blocks away at the Cleveland Clinic and Case Western Reserve University’s Health Education Campus, inside a venue ringed by police and fortified by steel barriers, Trump and former Vice President Joe Biden tussled their way through a 90-minute debate punctuated by interruptions and exclamations.

Cleveland marshalled law enforcement from numerous agencies to secure the area. Officers were seen on horses, in SWAT vehicles, riding bicycles, wearing riot gear and directing traffic around the Clinic’s expansive campus on the city’s East Side.

Ohio National Guard troops, requested by Mayor Frank Jackson and deployed by Gov. Mike DeWine, guarded the “event zone” on foot and in Humvees and the scene outside the debate remained relatively peaceful.

The protest – organized by Black Lives Matter Cleveland, climate activists and other social justice groups – drew a diverse crowd saying they were there to stand united in their hope of voting Trump out of office in November.

Activist Asia Jones, who served as the emcee of the event, said the pre-debate protest was a way to call attention to the fact that “all black lives matter.”

Natalie Capasso, 19, attended with a friend, both hoping to call attention to the wildfires ravaging the Western United Sates.

“With climate change happening,” Capasso said, “We know it’s happening, government officials have the power to do something and they’re not doing enough.”

Following the protest, the group of more than 1,000 peacefully marched through Wade Oval chanting what have become the mantras of the summer of 2020, including “No Justice, No Peace’” and “I can’t breathe.”

Once the march concluded, the group dispersed, well before the debate began inside.

“The event concluded with no major incidents and demonstrations and attendees remained mostly lawful and peaceful,” the Cleveland Division of Police said in a press release shortly after the debate ended.

Four arrests were made as of 11 p.m., according to the release. More details are expected at a Wednesday afternoon news conference with city officials.

Following the city’s playbook from the 2016 Republican National Convention, Cleveland’s Board of Control banned a wide range of items from the blocks surrounding the hospital system’s campus, though firearms were not included in the list, in accordance with Ohio state laws.

The prohibitions did include lumber, fireworks, drones, pepper spray and larger backpacks. Police were seen checking the bags of some passersby on Carnegie Avenue before the start of the debate.