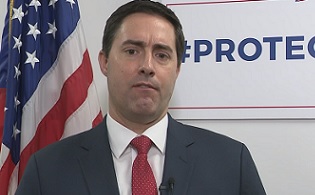 Ohio Secretary of State Frank LaRose said results will be a ‘true reflection’ of the will of voters when they cast ballots for President.

But in an election season when President Donald Trump, has recently avoided the question of whether he would accept the results of his attempts to gain a second term in the White House against challenger and former Vice President Joe Biden, LaRose said that results in Ohio will be honest and that voters can feel comfortable with the system.

LaRose, making an appearance when he announced Anheuser-Busch will donate nearly 3,000 gallons of hand sanitizer to Ohio polling locations, would not specifically address Trump’s comments from earlier this week. But in a state where Biden is holding onto a five-point lead over Trump according to a new Fox News poll, LaRose is confident that election results across the state can be trusted.

“Ohioans know the results will be honest,” LaRose said at the appearance, according to Cleveland.com. “”Ninety-six percent of Ohioans say that it’s easy to vote. Large, massive numbers of Ohioans know they can trust their election result. When this thing is over, people will know it’s a true reflection of the will of the people of Ohio. And if a candidate chooses to not the accept the results, I think that will look ridiculous.”

In Ohio, residents must request absentee ballot unlike other states where the ballots are sent to voters unsolicited. On Wednesday, Trump took a wait-and-see approach to a question about whether he would accept the results of voting in November and called absentee ballots “ridiculous.”

According to Cleveland.com, Ohio elections officials have already received at least 1.8 million applications for absentee voting compared to 805,000 in 2016. Mail-in ballots will be accepted in Ohio as long as they are postmarked on election day and as long as they arrive to be counted no more than 10 days after the election.