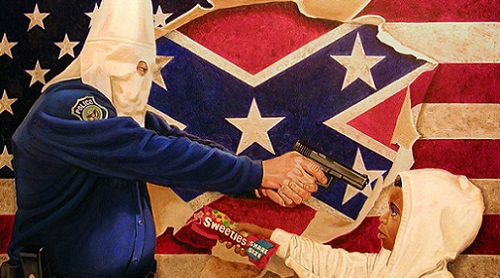 According to the Intercept, the report was released by Democratic Rep. Jamie Raskin, chair of the House Subcommittee on Civil Rights and Civil Liberties, before a Tuesday hearing on the efforts of white supremacists to infiltrate local law enforcement agencies. An extensively redacted version of the document was publicly released in 2006 and is among a series of bureau documents that display a growing concern about white supremacists in law enforcement. The committee invited the FBI to attend the hearing but the agency declined.

“Having personnel within law enforcement agencies has historically been and will continue to be a desired asset for white supremacist groups seeking to anticipate law enforcement interest in and actions against them,” a previously redacted section read.

Another previously redacted section warned of “factors that might generate sympathies among existing law enforcement personnel and cause them to volunteer their support to white supremacist causes,” which could include hostility toward developments in U.S. domestic and foreign policies “that conflict with white supremacist ideologies,” the report warns.

Some redactions do not seem to be justified, for instance, the FBI’s conclusion that “white supremacist infiltration of law enforcement can result in other abuses of authority and passive tolerance of racism within communities served” — an apparent recognition of the potential harm to the public posed by white supremacist individuals embedded in police departments.

The redacted material also broke down “strategic infiltration and recruitment campaigns” carried out by white supremacists. The document notes that the National Alliance (NA), a white nationalist group founded by William Pierce, was key to much of the information regarding white supremacists attempting to infiltrate law enforcement.

“White supremacist infiltration of the federal government, including the FBI, plays a prominent role in Pierce’s novels, The Turner Diaries (1978) and Hunter (1989), both widely read works that are sometimes interpreted as practical guidance within white supremacist circles,” the document reads.

The document notes that several retired and active members of law enforcement were known to be members of the NA, with some actually holding leadership positions. Their success at infiltrating law enforcement led to concerns that it would lead other white supremacist groups to try similar tactics.

Another previously redacted section goes into examples that the FBI found of “white supremacist sympathizers,” in law enforcement.

In one, the memo mentions that “in July 2006, a former police officer with possible ties to the KKK was charged with civil rights violations involving alleged death threats made against black schoolchildren and a black city council member.”

In another, the report mentions the case of Shayne Allyn Ziska, a state correctional officer at the California Institution for Men in Chino, California, who was sentenced to 17 1/2 years in federal prison. “Ziska was convicted on federal racketeering charges for helping the Nazi Low Riders white supremacist prison gang distribute drugs and assault other inmates, and reportedly providing white supremacist indoctrination to an inmate,” the report notes. “Ziska advised he considered himself a government infiltrator consistent with National Socialism’s strategy for revolution.”

There isn’t an exact explanation on why some of the material was redacted. While notes in the document express concerns about certain investigative techniques being revealed, certain redacted sections were about events that were already public knowledge. Calls for the FBI to increase transparency in its efforts to fight white supremacy have long been rebuffed by the organization.

“The public deserves to see the truth reflected in this finally unredacted report. The FBI saw long ago the multiple potential dangers associated with violent white supremacy and its efforts to infiltrate local law enforcement with ideas, attitudes, and personnel,” Raskin wrote in a statement to the Intercept.

“The FBI’s continuing refusal to acknowledge and combat this threat, just like its refusal to appear today, constitutes a serious dereliction of duty,” Raskin added. “These newly revealed passages underscore the seriousness of the threat posed by white supremacists to law enforcement personnel and the public at large.”

The thing I find most concerning is that this report was written 14 years ago. So they’ve known this could be a serious problem but it’s unclear what, if any, actions the FBI took to combat white supremacists in law enforcement. Within the document itself, there is a lot of talk about how bad this could potentially be, but there are no actionable steps outlined on how to stop it in its tracks.

Former FBI Agent Mike German published a report last month outlining the dangers of explicit racism in law enforcement and the failures of law enforcement agencies to actively prevent those with white nationalist beliefs from infiltrating their ranks.

Over the last 20 years, multiple law enforcement personnel with potential connections to white supremacist groups have been exposed. In recent years, there have been multiple examples of state reps, lawmakers, and countless law enforcement officials making racist and nativist social media posts, “which demonstrates that overt bias is far too common,” German writes.

“Efforts to address systemic and implicit biases in law enforcement are unlikely to be effective in reducing the racial disparities in the criminal justice system as long as explicit racism in law enforcement continues to endure,” German wrote. “There is ample evidence to demonstrate that it does.”