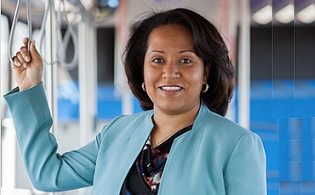 A $75,000 grant from the Cleveland Foundation is allowing area commuters to ride RTA buses and trains free on Nov. 3 to encourage voting.

Area commuters will be able to take public transportation for free on Election Day next week as part of a $75,000 grant from the Cleveland Foundation, the Greater Cleveland Regional Transit Authority Board of Trustees announced at its meeting on Tuesday.

All customers using the RTA’s bus, rail and paratransit services on Nov. 3 will not pay thanks to the grant. Similar services are being offered in other areas of Ohio including Toledo, Akron, Cincinnati and Dayton, the RTA announced in a news release.

“Now, more than ever, it is crucial that under-served populations that have lacked access to polling locations be able to exercise their right to participate fully in democracy,” RTA CEO and General Manager India Birdsong said in the release. “We value the citizens of this region and want to help them be able to remove all barriers, including ensuring that they have access to affordable, safe, reliable transportation on election day.

Birdsong said that RTA officials hope the free transportation to commuters on Election Day drives voter participation to historic levels around Cleveland and Cuyahoga County. RTA users will be required to continue to wear face-coverings when using transit services as well as waiting as bus stops or train stations. Paratransit users are asked to schedule rides in advance of Nov. 3.

Like Birdsong, Cleveland Foundation Senior Vice President India Pierce Lee said that the purpose of the grant is to help encourage area residents to vote by taking advantage of not having to pay for public transportation on their way to the polls.

“We know that people are turning out in record numbers to vote early in person, and many are also voting by mail,” Pierce Lee said in the release. “This is a non-partisan partnership to help residents fulfill their civic duty by removing one of the biggest barriers to participating in our democratic process.”