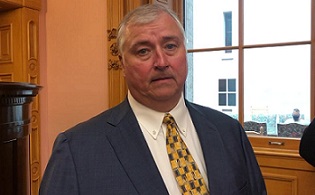 By all indications, the Ohio Republican Party appears to have maintained its supermajorities in both state legislative chambers.

By all indications, the Ohio Republican Party appears to have maintained its supermajorities in both state legislative chambers as they head into a new term next year.

The results from Tuesday night are unofficial and several races are too close to call. But Republicans were able to net at least a few seats in the Ohio House of Representatives and have a chance to gain a seat in the Ohio Senate.

The GOP already has control of both chambers, with 61 out of 99 seats in the House and 24 out of 33 seats in the Senate this term.

Here are some key takeaways from what we know about the 2020 Ohio Statehouse races:

Three districts in the Ohio House of Representatives have flipped from Democrats to Republicans — all located in Appalachian Ohio on the far eastern edge.

There are a handful of other races that are too close to call, though all are currently held by Democrats.

Outstanding absentee ballots and not-yet-counted provisional ballots may alter the result in some of these races. Mail-in ballots that were postmarked by Monday can be received by county boards of elections through Nov. 13. Provisional ballots will be judged individually by local elections officials in the coming weeks to determine if they are eligible to be counted.

While all 99 seats for two-year terms in the Ohio House were up for grabs Tuesday, just half of the Ohio Senate seats (which are for four years) had elections.

There were 16 senate races in total. Incumbents were victorious in 14 districts, with Republicans flipping one seat and another being too close to call.

It was only two years ago that state Rep. Jack Cera, D-Bellaire, had such a strong hold on Ohio’s 96th House District that Republicans decided not to put up a candidate.

Indeed, Cera ran unopposed in both 2016 and 2018 in the 96th District, which covers all of Jefferson and Monroe counties and part of Belmont County on Ohio’s eastern edge.

Term limits prevented Cera from running again in 2020. And Republicans have taken advantage.

With nearly all precincts reporting, the unofficial results on election night show a major win for the GOP in Cera’s seat. Republican Ron Ferguson has 66% of the vote to Democratic candidate Richard Olivito’s 31%.

The 96th District is not the only Appalachian Ohio seat to flip from blue to red. Two others have flipped as well:

Householder scandal not much of a factor

In the months since Speaker of the House Larry Householder was arrested for alleged corruption, both political parties have tried to pin the ensuing House Bill 6 scandal on the other.

Through carefully target advertising campaigns, the parties blamed each other for putting Householder in charge and approving the controversial nuclear bailout bill in 2019, the Ohio Capital Journal has reported.

It doesn’t seem to have made much of a difference. Householder remains in office and won re-election on Tuesday over four write-in candidates.

Back in January, Householder’s campaign committee donated the maximum amount ($13,292) to six different Republican legislative candidates. Five won their GOP primaries in the spring and were on Tuesday’s ballot.

Within days of Householder’s arrest in July, three of those candidates announced plans to donate or return his cash: John, Young and Stewart.

In contrast, one Republican legislator who reportedly played a role in Householder being investigated for alleged corruption may have lost his seat. That’s Rep. Greenspan, who is trailing in his bid for another term. Greenspan was identified by cleveland.com as being “Representative 7,” an unnamed lawmaker in the federal affidavit who reportedly provided information about Householder to the FBI.