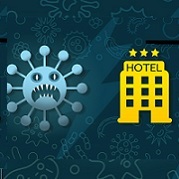 A third of hotels in the U.S. could go under due to the coronavirus pandemic, according to a new study.

Some 33% of hotel owners expect to hand the keys back to their lender or enter a forced sale situation, according to a September 7 survey of 103 hotels by the Hospitality Asset Managers Association (HAMA).

“This would be for a doomsday scenario where the owner can’t come to terms with the lender… The 33% number was higher than we thought we were going to see,” said Larry Trabulsi, HAMA board member and executive vice president of asset management at CHMWarnick, a Massachusetts-based hotel asset management company.

Lender relations have become a top stressor for hotel owners, with 62% of hoteliers saying they were worried about capital stack issues (financing arrangements with a network of lenders and investors).

“There may be multiple levels of lenders,” said Trabulsi. “Stress builds when you’re having numerous discussions with all the parties involved and weighing the priorities of investors who will get paid back first.”

“For the hotel industry, we have such heavy investment in the land, the building, the furniture, fixtures, equipment — our debt share there is far greater” than other businesses, Best Western CEO David Kong told Yahoo Finance.

When commercial lenders decide to stop working with borrowers, they sell defaulted loans to special servicers, which package loans with hundreds of others and underwrite them into a trust — making repayment schedules significantly less accommodating. An all-time high of 26% of hotel loans were already handed over to special servicing collectors in September, according to Trepp, a New York-based data and analytics company.

“In an ideal situation, the hotel owner has a direct loan with a lender who they have a relationship with, so the likelihood of working things out is significantly higher [than with a special servicer],” said Trabulsi.

‘No one knew how long it would last’

Few hotels are immune from the impact of the coronavirus pandemic on travel and hospitality. Less than 3% of hotels are meeting their budgeted revenue per available room for the year, with 78% of hotels losing at least half their revenue. Most hoteliers expect a 45%-60% revenue decline in 2021 compared to 2019, according to HAMA.

“When COVID first impacted hotels back in March, no one knew how long it would last. Initial discussions with lenders took one to three quarters of impact into account and arranged for forbearance or reduced interest payments,” said Trabulsi. “It’s evident now as we’re coming into the fourth quarter and 2021 that the impact of COVID is going to last significantly longer.”

Travel halted during the coronavirus pandemic lockdowns and has been slow to recover, totaling a $415 billion loss for the U.S. travel economy since March. Travel spending was still 41% lower than last year for the week ending October 10 (lows in March and April sank to an 88% loss compared to the same period in 2019), according to the U.S. Travel Association, a Washington D.C.-based travel advocacy nonprofit.

“There are a lot of factors at play, like the health of the economy… It comes down to personal preferences — when will people be comfortable jumping on a plane and staying in a hotel,” said Trabulsi.

‘We just need to get over the virus’

But the industry isn’t doomed forever, hotel owners say. Some 40% of hoteliers in the survey said hospitality would recover by 2023, and 37% predicted recovery by 2024. No respondents expected the market to recover by 2021, according to the survey.

“The long-term prospects for the hotel industry is excellent. People always want to travel,” said Kong. “There’s a tremendous amount of pent-up demand. We just need to get over the virus.”

Still, prospects in large cities may take longer to bounce back. Hotels in Houston, Chicago and New York were in the most trouble in September, with delinquency rates up to 72.3%, 54.9% and 31.5%, respectively, year-over-year, according to Trepp.

“Some markets may come back sooner — drive-to locations have held up relatively well and may recover to pre-COVID revenue levels earlier. But large urban convention hotels may lag a bit,” said Trabulsi.