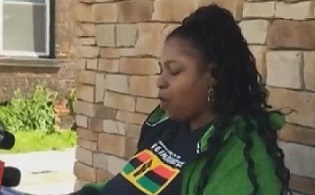 Samaria Rice posted a loving message in honor of her young son, who was shot dead by a Cleveland cop.

Samaria Rice posted a loving Facebook message last Sunday honoring the life of her 12-year-old son, who was shot and killed six years ago by a police officer in Cleveland who mistook his toy gun for a real one.

“How I Honor my Son and his Siblings on this day,” she wrote. “This is so difficult but they keep me going.”

In a thoughtful statement, Rice wrote that “it never gets easy.”

“As we honor Tamir Rice on his 6th death anniversary. I wanted to show how pain is turned into power,” she shared. “By loving my children and grandchildren unconditionally. By sharing pictures of the gazebo located in Chicago now at The Arts Bank.”

“Under this gazebo — which was located in Cleveland, Ohio — on Nov. 22, 2014, is where my son was assassinated by law enforcement,” Rice posted. “This is my forever lasting memory of my son, Tamir.”

Chicago artist Theaster Gates acquired the gazebo in which the young Tamir Rice was shot and killed and had it installed at his Stony Island Arts Bank in 2019.

Gates has said that he ultimately hopes to return the gazebo to the city of Cleveland.

“We recognize that because of the history of violent acts against young black males in cities by the police, this gazebo is a national memorial, a national testament,” said Gates at the opening of the reconstructed gazebo in June. “It’s a national call.”

His provocative work was noted by the mother still in mourning.

The painful sixth-year anniversary of Rice’s shooting death was compounded by the news that 17-year-old Kenosha shooter Kyle Rittenhouse was released on $2 million bail Saturday after funds were raised by conservative figures, including Mike Lindell of MyPillow and former child actor Ricky Schroeder.