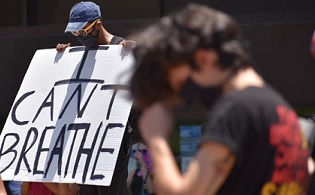 The policy should restrict the fewest freedoms possible, limit the use of force, target only harmful behavior, and use predictable and unbiased tactics, DeWine said of the mass protest standard developed by the Ohio Collaborative Community-Police Advisory Board.

The board also revised its use of deadly force standard to prohibit all chokeholds and neck restraints except when officers are justified in using deadly force to defend themselves or others from serious physical injury or death.

“We must rebuild trust between the public and law enforcement, and these changes continue to build on Ohio’s work to improve community-police relations,” DeWine said.

The standards are voluntary but departments that don’t follow them will be omitted from an annual published list of departments in compliance.

DeWine called for the mass protest standard and a requirement for independent investigations of all police shootings and deaths in police custody after protests broke out in May and June following the killing of George Floyd in Minneapolis.

The board previously created statewide police standards for use of force, use of deadly force, recruiting and retention, and body cameras, among others.