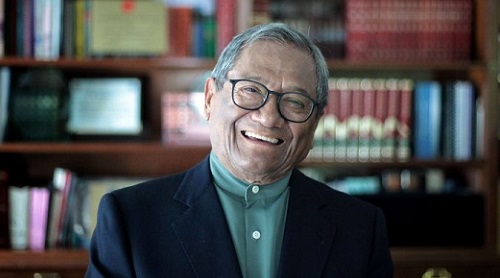 Once referred to as the “most important Indian” by Native American rights advocate and author Vine Deloria Jr., Adams was central to the fight to uphold tribal treaty rights during the 1960s and 1970s.

“An indispensable leader, and essential follower and a brilliant strategist, he shaped more Native American civil, human and treaty rights policies than most people even know are important or why,” the Northwest Indian Fisheries Commission said in its announcement of Adams’ death.

Adams was a Assiniboine-Sioux and a member of the Franks Landing Indian Community. He died at St. Peter’s hospital in Olympia, Wash. on Dec. 21.

According to the Smithsonian National Museum of the American Indian, Adams was born on the Fort Peck Reservation in Montana and raised on the Quinault Reservation in Washington State.

In 1963, Adams joined the National Indian Youth Council and began focusing on tribal treaty rights–just as the issue was sparking conflicts between Native American communities and local governments.

In the mid-1800’s, the U.S. entered into a series of treaties with tribes in what is now the state of Washington. Those treaties contained language reserving the tribes’ right to fish “in common with the citizens of the Territory.”

Native American communities believed those fishing rights gave tribes the ability to supersede any state regulation. But sports fisherman, local governments, and some state courts argued their fishing rules should apply to the Native American community. In the 1960s, Northwest tribes called on the federal government to recognize their tribal fishing rights as the treaties dictated.

Adams is most well-known for his work protesting state fishing regulations throughout the 1960s and 1970s. During the Pacific Northwest Fish Wars, Adams was shot and landed in jail several times for protesting. He also served as a close advisor to several tribal leaders in the Northwest during that struggle.

The battle of treaty rights and tribal sovereignty eventually reached a federal district court in Washington state. It was ultimately decided by the Ninth Circuit Court of Appeals with the case, U.S. v. Washington. Adams directly represented tribal fishing people during the trial in 1974.

In a win for tribal communities, the federal appeals court affirmed in its opinion called the Boldt Decision that Native Americans generally retained hunting and fishing rights in their historic territories according to previously negotiated treaties.

Adams was active in the American Indian Movement, a grassroots movement focused on addressing systemic issues of poverty and inequality for Native Americans. He joined the group’s Trail of Broken Treaties march across the country in 1972. The protest ended with participants occupying the Bureau of Indian Affairs offices in Washington, D.C. He helped resolve that occupation as well as one involving hundreds of people at Wounded Knee a year later.

During negotiations over the occupation at the Bureau of Indian Affairs, Adams drafted the “20 Points,” a statement viewed as essential in the history of treaty rights, according to the Museum of the American Indian.

Until his death, he continued to advocate for Native young people’s education on treaty rights and for their participation in their community’s affairs.