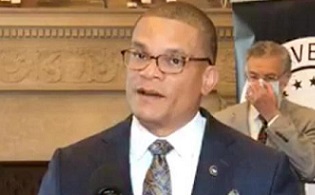 The suspensions range from 13 to 30 days and come nine days after a patrol officer was fired for use of excessive force during an arrest.

Six officers from the Cleveland Police Department have been suspended without pay following an internal investigation into officers’ use of excessive force during an arrest, city public safety officials announced Wednesday night.

The results of the investigation were released by Cleveland Public Safety Director Karrie Howard and came nine days after Cleveland patrol officer John Petkak was fired for using excessive force during an arrest.

According to reports, Howard determined that the six officers violated police policy in a variety of ways, including improper use of police body cameras, failure to intervene and improper reporting. The suspensions range anywhere from 13 to 30 days, Howard announced.

The investigation was launched following eight allegations excessive force were made in 2018 and 2019, including one in 2018 that led to Petkak being fired. The inquiry found that Petkak repeatedly used excessive, unnecessary and unreasonable uses of force, according to reports, including stepping on and grabbing the throat of a person.

A report also found in the same incident that Petkak slammed a handcuffed person onto the trunk door of a vehicle. The investigation also determined that Petkak used untruthful information in reports, tased a man who was non-violently not obeying police commands and that he failed to use proper de-escalation techniques as outlined by police standards, the report said.

The internal investigation was conducted by the Internal Affairs Division of the Cleveland Police Department, reviewed by Cleveland Police Chief Calvin Williams and then submitted to Howard for a ruling of discipline.

When the incidents took place, all six of the officers, like Petkak, were assigned to the police department’s Third Division. Howard announced the following officers have been suspended:

The report states that the suspensions will take place during the officers’ next tour of duty.