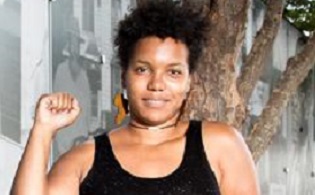 Columbus Police Officer Adam Coy was fired last week for fatally shooting and killing Andre Hill on a non-emergency call last week. A neighbor had called 911 complaining of a man turning a car engine on and off.

“There’s a vehicle out in front of my house, right beside my house, in the street, by the curb, running,” the caller says in the 911 call recording released by Columbus Police. “I figure, if it’s company for the neighbors they wouldn’t be out there running it for that long period of time.”

Coy and another officer encountered Hill in a neighbor’s garage, where city officials say Hill was an expected guest. It’s not clear, however, that Hill was the man the caller was referring to.

On Monday night, following news of Coy’s firing, dozens of protesters gathered outside the caller’s house on Oberlin Drive in northwest Columbus.

“You called the cops because your white fragility allowed you to be so scared of a Black man in your neighborhood that you felt like he had a death sentence,” Hana Abdur-Rahim, one of the event’s organizers, said through a bull horn. “And it’s not O.K.”

Nine white demonstrators held large signs with each letter of Hill’s name. Others held a large sheet that read in block letters, “Stop Calling The Cops On Black People.”

Ginnie Vogt, with the group Standing Up for Racial Justice, read from a prepared statement.

“When we call the police, we are calling in a force that creates harm. At worst, we are costing Black lives,” Vogt said. “We call on our white neighbors, friends, and families to stop calling the cops and to consider the dynamics of racism that play out when cops become involved.”

“If they’re concerned and it’s non-threatening especially, they can go up and talk to the person, ‘Hey, are you O.K.? Do you need something? What’s going on?’ Ask more questions and be a neighbor and see the humanity in people,” Abdur-Rahim says.

Abdur-Rahim points out this is not the first time an incident like this has happened in Ohio. In 2014, a Beavercreek Police officer shot and killed John Crawford, a 22-year-old Black man, in a Wal-Mart after a fellow customer called 911, claiming Crawford had a gun. Crawford was shopping and holding a BB gun that was for sale in the store.

Abdur-Rahim and her fellow activists want the city to provide a non-emergency line to prevent similar situations from happening again.

“Andre Hill could still be alive if the caller didn’t call 911 and if we had a separate hotline created that provided resources for the community when they’re having non-emergency issues,” she says.

Criminal and civil rights investigations into Hill’s death are still ongoing. No state or federal charges have yet been announced against Coy.