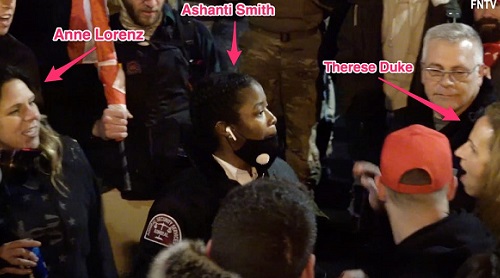 A Black security guard who says she punched a white Trump supporter in self-defense during the contentious evening on Washington, D.C., streets the night before the Capitol riots said she has been fired from her security job.

On top of being unjustly terminated from her job, Smith is now facing criminal charges. A GoFundMe campaign has raised just over $100,000, surpassing its $85,000 goal, to assist her with living and legal expenses.

Washington, D.C., resident Ashanti Smith, 28, said she is the woman in a viral video that shows a uniformed African-American female punching a white woman, who has been identified as Therese Duke. After the skirmish, Duke was left with a bloody nose the night before the insurrection at the U.S. Capitol.

In her fundraising campaign’s description, Smith said the video footage of her encounter with demonstrators while at Washington’s Black Lives Matter Plaza doesn’t show how rioters harassed her before she punched Duke. Smith had been on a break from her job at a nearby building when she encountered the crowd Duke was in.

Another woman named Anne Lorenz was also charged after the incident.

“I honestly feared for my life. The video makes me look like I am the aggressor, but it does not show what happened prior to my defending myself,” Smith wrote on GoFundMe.

“People shoved me, tried to take my phone and keys, yelled racial epithets at me, and tried to remove my mask. I asked them to social distance and stay out of my personal space due to COVID 19. They refused, and I was afraid of being hurt and harmed. After being assaulted, I defended myself,” she continued (Harrison, 2021).

*Your Black World news correspondent Victor Trammell edited and contributed to this report.