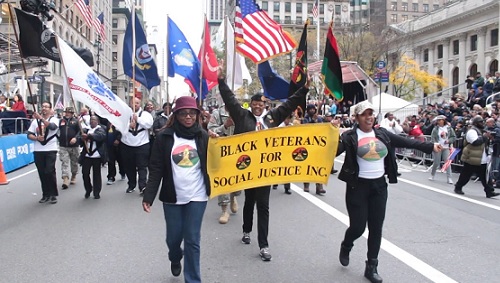 In 2010, while serving as an Army combat medic, I was stationed on a former Nazi-base in Western Germany.

The history wasn’t inconspicuous. In fact, white soldiers were often infatuated by it. They’d sneak selfies beside a swastika embedded into a brick building not far from the barracks I called home—remnants of the Third Reich that hadn’t been wiped clean in the decades since American forces had taken over the garrison.

American soldiers casually reading Hilter’s Mein Kempf, in uniform no less, were largely viewed as harmless. The pervasive use of Confederate symbols were simply an innocuous display of Southern pride. And right-wing talking points and conspiracy theories disguised as office banter were widely tolerated as inconsequential.

So, it came as little shock when the identity of nearly one-fifths of those apprehended for the siege on the capitol earlier this month were revealed to be both present and former members of the military. The country watched in horror as images of white mobs dawning military-grade equipment and racist paraphernalia stormed a session of Congress as it sought to certify the 2020 election. Many of those leading the insurrection at the behest of Donald Trump were veterans whose radicalization had long-been forewarned, and whose loyalties had officially shifted.

For years, rallying cries from veteran-advocates citing a rise in white-nationalism within the ranks coincided with mounting efforts by extremist groups to recruit soldiers, sailors, marines and airmen for their weapons training and combat expertise. It all came to a violent head within the halls of Congress on Jan. 6.

The insurrection has left little doubt that white supremacist extremists remain the deadliest domestic terror threat in the United States. And while racism is an ever-present undercurrent in our nation’s military, leaders at the Department of Defense continue to downplay the rise and breadth of right-wing ideology among troops—preferring to paint incidents of racial hatred as fringe, not systemic. The siege of the capitol has shattered that lie.

For many service members, the tenor of the events of Jan. 6 were not unfamiliar. As early as 2017, 1 in 4 reported having white nationalist sentiments espoused within their units. Congressional efforts to address this were thwarted in the 2020 National Defense Authorization Act, as a provision calling for the screening of new recruits for white nationalist sympathies was vetoed by President Trump.

“In the military, unchecked white nationalism places a tax on Black service members’ psychological safety,” said Timothy Berry, a graduate of the United States Military Academy West Point and former Field Artillery Officer. “It is a cancer to unit cohesion and military readiness.”

An honest reckoning around race has been historically avoided by the Department of Defense, an institution whose bureaucracy and public relations machine has been its scapegoat from accountability. But, Black veterans are beginning to fight back, forcing the DoD’s hand by compelling the release of confidential survey data that paints a grim picture of the state of racial affairs across the military.

Though the singular survey, made public this past December after staunch advocacy by the Black Veterans Project, fails to capture the full scope of the problem across years-in-service, nearly one-third of Black troops cited experiencing racial harassment in 2017 alone and believed formally reporting these incidents would result in negative reactions from leadership and adversely affect their ability to be promoted. A history of bad paper discharges and racial disparities in military justice give cause for concern.

“Military leaders are too willing to give the benefit of the doubt to people who look like them. This problem is not new” said Coretta Gray, a former Air Force judge advocate who now works extensively to bring light to stark racial disparities in military justice. “Black service members often operate in work environments that are hostile and feel powerless to change it.”

Last week, Senator Kirsten Gillibrand (D-N.Y.) announced efforts to work with congressional colleagues on legislation to provide U.S. troops the same legal protections against discrimination as civilian employees by extending Title VII protections under the Civil Rights Act to the service members. Presently, no federal statutes bar discrimination in the military, leaving wide room for the D.O.D to use its own discretion around tackling issues of racial discrimination.

Retired General Lloyd Austin, who was confirmed as the nation’s first African American secretary of defense Friday and whose appointment has been widely viewed as a gesture of good faith by the Biden administration to diversify top military brass, has vowed to root out racism and extremism. It remains unclear how he intends to accomplish this mission and whether he’d support the legislative efforts to reshape the military’s equal opportunity policies and procedures proposed by Senator Gillibrand.

One thing is certain, if serious and transformative steps are not taken, the military risks further exacerbating the threat posed by right-wing extremists by allowing its ranks to be a training ground. And safety and careers of Black service members will continue to be collateral damage.

Richard Brookshire is the co-founder and executive director of the Black Veterans Project.