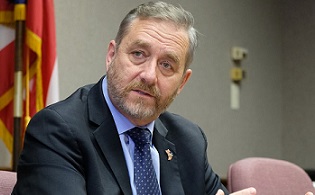 Yost filed the request with Ohio Supreme Court Chief Justice Maureen O’Connor under a state law allowing the suspension of local officials charged with felonies for conduct in office.

If Johnson does not voluntarily step aside, O’Connor could appoint a three-judge panel to decide on his suspension.

A federal indictment unsealed this week accuses Johnson of filing false expense reports and siphoning money from federal grants, allegedly pocketing about $177,000 since 2010.

The Ohio attorney general has similarly pushed to suspend indicted council members in Toledo and Cincinnati.

“Sadly, it’s become routine for us to initiate suspension proceedings for indicted city council members – Ohioans deserve representation free of public corruption and we must constrain those that abuse their power,” Yost said in a news release Friday. “The suspension of a public official facing charges of public corruption is the proper remedy while the criminal case is resolved.”