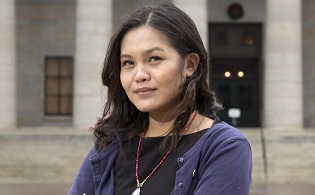 A shooting spree in Georgia left eight people dead, most of whom are of Asian descent. Leaders in Ohio say this is just the latest example of the uptick in violent acts occurring against Asian American and Pacific Islanders since the start of the COVID-19 pandemic and legislators say they have a bill that can help address the problem.

A bipartisan bill, SB87, in the Ohio Senate would create a state commission and state office for Asian American and Pacific Islander affairs.

Sen. Tina Maharath (D-Canal Winchester), the first Asian American woman elected to the Ohio General Assembly, says this would create an opportunity for Asian Americans to speak out about violence and hate crimes.

“If we don’t create this safe space for constituents of Asian American descent to come in to provide us that information, we’re not going to be able to gather and disseminate that information, unless they bring those concerns up to us,” Maharath says.

Sen. Niraj Antani (R-Miamisburg), the first Indian American to serve in the Ohio Senate, is also a sponsor of the bill.

“Having good data to make decisions off of is extremely important,” says Antani. “And one of the things this commission could do is work with law enforcement agencies and try to coordinate and get better data on different kinds of hate crime.”

Antani says the state should be working to reduce violent acts against any race, but adds that Asian Americans and Pacific Islanders tend to receive less attention than other minority communities.

“When you are seen as — ‘the other’ — people get afraid of ‘the other’ and so this commission is a way of raising the issues that the Asian American community has in Ohio and certainly one of the goals should be to combat anti-Asian racism,” Antani says.

The group, Stop AAPI Hate, has been collecting data on racially motivated incidents against Asian Americans and Pacific Islanders. Their latest report says 3,795 incidents were reported to the group from March 2020 through February 2021.

These allegations of hate incidents include:

“These killings come amid a number of anti-Asian incidents that’s been going on since the beginning of the pandemic before we even went into lockdown. And I just think this is the opportunity for all of us including Ohioans to stand up for the rights of our fellow Americans especially our Asian Americans. That way we can be safe and be treated with respect and dignity,” says Maharath.