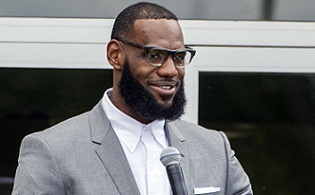 Since entering the NBA in 2003 as an 18-year-old phenom, LeBron James has completely transformed what it means to be a professional athlete. Aside from being dominant on the court, he frequently uses his platform to combat social injustice and has evolved into a savvy businessman whose interests extend to music, the restaurant industry, education, lucrative endorsements, and film and television, just to name a few. And now King James is expanding his portfolio to include sports franchise ownership, because what do you give the man who already has everything else?

ESPN reports that the Akron, Ohio, native is joining Fenway Sports Group, which will give him a piece of the Boston Red Sox, Liverpool Football Club, Roush Fenway Racing, and regional sports network NESN. Maverick Carter, his business partner and childhood friend, will be joining in on the fun as well, with the two of them becoming FSG’s first Black partners.

Those up on LeBron’s outside endeavors might note that he already owned 2 percent of Liverpool. By joining forces with FSG, I can confirm that yes, that investment will now be expanded upon.

That sound you hear is LeBron’s net worth inflating and running out of elbow room.

“I think for me and for my partner, Maverick, to be the first two Black men to be a part of that ownership group in the history of that franchise, I think it’s pretty damn cool,” James told reporters Tuesday night after beating the Minnesota Timberwolves. “It gives me and people that look like me hope and inspiration that they can be in a position like that as well, that it can be done. It gives my kids at my I Promise School more and more inspiration as well.”

FSG was already one of the most powerful sports ownership companies on the planet. Do you know what adding someone with LeBron’s popularity and pedigree is about to do for that ownership group? This is what we call “big business.”

And he’s not done either. League rules prevent current players from becoming owners of NBA or WNBA franchises, although that didn’t stop him from mulling a potential purchase of the Atlanta Dream in January before they were eventually sold to an ownership group that includes 2020 The Root 100 honoree Renee Montgomery. But after he retires, don’t be surprised if he becomes part-owner of the Cavs or another NBA franchise. He predicted as much during NBA All-Star Weekend in 2019.

“I believe if I wanted to, I could own a team or be part of a basketball team,” he said. “I know I got so much knowledge of the game that I don’t want to, once I stop playing—I just [don’t] want to get away from the game.”

Congrats to LeBron for continuing to raise the bar and uplifting others along the way. We love to see it.

Menace to supremacy. Founder of Extraordinary Ideas and co-host and producer of The Extraordinary Negroes podcast. Impatiently waiting for ya’ll to stop putting sugar in grits.