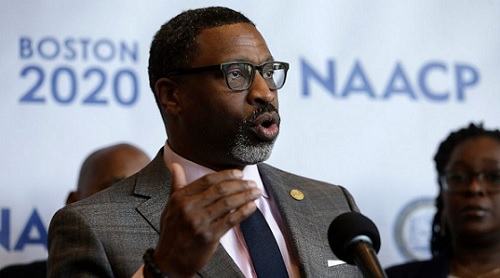 The NAACP is asking the National Football League to make good on its promises of investment in racial justice causes and not allow the league’s programming to “be used as a bargaining tool for Rupert Murdoch to help fund Fox News’ hatred, bigotry, lies and racism.”

“The NFL, a league where nearly 70 percent of the players are Black,” Johnson wrote, “should not be complicit in helping to increase the profits of Fox News, a leading voice in condemning those same players for peaceful demonstrations against systemic racism.”

“We are all familiar with the depths of manipulation and polarizing tone Fox News is willing to espouse,” he contended. “It remains to be seen whether the NFL will act to safeguard its players and fans from further exploitation, by prohibiting the media conglomerate from unduly capitalizing on the largesse of its corporate affiliations, and utilizing the enrichment to destabilize our democracy.”

In a statement Thursday decrying the network’s “ongoing exploitation of the NFL,” Johnson wrote that “for several decades, the Fox Corporation, and more specifically, Fox News has represented the worst traditions of American broadcasting.’

“The media outlet has used its news division to sow bigotry and racism, create dissension, spread misinformation, and promote conspiracy theories that ultimately led to an insurrection against the U.S. Capitol,” he continued. “It is safe to say, the views and opinions of Fox News are often squarely positioned against the progression of our democracy and not in the general public’s best interest.”

“This is the same network that has used its hosts and personalities to regularly attack the NFL and its players for promoting racial justice,” Johnson noted. “However, this is just one aspect of its inaccurate, incendiary coverage of racial injustice.”

According to Johnson, the network exploits its licensing deal with Fox Sports to fund its bigoted coverage on Fox News.

Despite the NAACP leader’s wishes, however, the NFL did strike a new deal with several networks this week, including Fox, and made new programming plans on Amazon Prime.