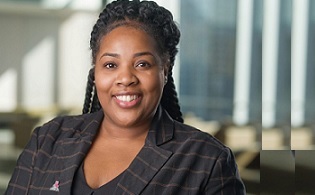 Judging by her impressive resume, East Cleveland native Crystal Bryant has been preparing for her new role as the executive director of the Cleveland Chapter of the NAACP all of her adult working life.

The Shaw High School graduate (Class of ’99) matriculated to Cleveland State University where she obtained a bachelor’s degree in social work (with a minor in criminal justice) before attending Tiffin University where she earned her master’s degree in criminal justice administration. However, her thirst for education continued and she attended Cleveland-Marshall College of Law where she earned a juris doctorate degree and passed the State of Ohio Bar exam in 2015.

Impressively, she earned all of her advanced degrees while working full-time as a social worker and serving on numerous boards and organizations, such as being the co-founder of Cleveland Votes, a volunteer for the Legal Aid Society of Greater Cleveland, and a member of the City Club of Cleveland Debate Committee. She also is a board member of the Aids Funding Collaborative and the Stephanie Tubbs Jones Drug Court Advisory Board, as well as a proud member of Alpha Kappa Alpha Sorority.

Ms. Bryant’s accumulated work and life experiences provide her with a clear vision and mission for the new role she is about to assume.

“My goal is to honor the work of the people whose shoulders I’ll be standing on, while seeking to engage the next generation of Cleveland activists. I have to reengage current and past members while attracting younger folks to the organization.”

In addition to expanding the core civil rights mission of the Cleveland Chapter, she wants to increase the focus on community and wealth building, as well as increase financial literacy within the membership of the organization.

She most recently served as the director of the Cuyahoga County Office of Reentry, a position she has held since being appointed in December of 2016, following a stint as an assistant prosecutor in the Criminal Division for the City of Cleveland. Both jobs fueled her passion for seeking justice and fair treatment for those individuals who have run afoul of the oftentimes brutal American criminal justice system.

Taking a quote one of her “sheroes,” the great activist and professor Angela Davis, she has adopted the motto, “I’m no longer accepting things I cannot change; I’m changing things I cannot accept.” This is exactly the can-do spirit the position of executive director of the Cleveland Chapter of the NAACP calls for — nay, demands. We can and should expect great things from Crystal Bryant, and judging from her past accomplishments the citizens of Cleveland won’t be disappointed. Godspeed.