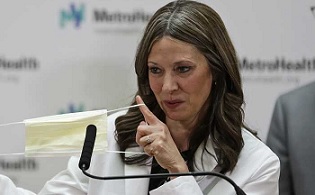 FEATURED PHOTO: DR. AMY ACTON WAS THE ACTING DIRECTOR OF THE OHIO DEPARTMENT OF HEALTH WHEN THE VIRUS HIT OHIO

The results of a new analysis by a UC Berkeley institute also placed the United States’ coronavirus response among the world’s worst.

Ohio’s strategy to curb the spread of coronavirus last year was ranked among the most effective in the nation, according to a new analysis by UC Berkeley’s Othering & Belonging Institute.

The most effective states, according to research published in the institute’s 2020 Inclusiveness Index, were those that put in place mitigation measures based on scientific data.

The Institute added COVID-19 response to its 2020 index.

“What is clear, however, is that the pandemic has had a severe and disproportionate impact on communities of color, the elderly, and people with disabilities,” the report says. “Moreover, the response to the pandemic has revealed or exacerbated dysfunctions in our health care systems and governance.”

To compile the ranking, the Othering & Belonging Institute measured the performance of all 50 states and 172 countries primarily based on three factors: rates of infection, deaths and testing.

The data revealed a trend: state governments that were more aggressive in issuing mask mandates, stay-at-home orders, and physical distancing rules fared better than states that did not.

While Ohio initially ordered lockdowns and was slow to reopen industries, many Ohioans bucked against the health orders. Protests erupted both at the Ohio Statehouse and outside of Dr. Amy Acton’s home during the early months of the pandemic.

Even as protests erupted statewide, Gov. Mike DeWine insisted Ohioans mostly wanted to do the right thing — namely protect one another by taking simple, convenient steps like wearing a mask in public and washing their hands with regularity. Ohio still has a mask mandate and other health orders in place.

Vermont, Alaska, and Maine were the three most effective states in responding to the coronavirus pandemic last year, the analysis said.

On the other end of the spectrum, the state with the poorest response to the virus according to the institute’s measures was South Dakota, followed by Iowa and Mississippi.

The worst-performing states, which also included Arizona and New Jersey saw significant outbreaks among communities of color and other vulnerable residents. In South Dakota, one out of every 500 residents died from COVID-19 last year, the report said.

Globally, the three most successful responses to COVID-19 came from the United Arab Emirates, Denmark, and Iceland. Other successful countries profiled in the report include New Zealand, Vietnam and Rwanda.

The bottom three countries on the list were San Marino, Montenegro and Belgium, all small European countries.

The United States, then led by President Donald Trump, ranked 161 out of 172 countries, placing it among the bottom 6 percent of countries.

Brazil and the United Kingdom were also near the bottom of the scale, scoring rankings of 155 and 141, respectively.

Read more about this year’s index.