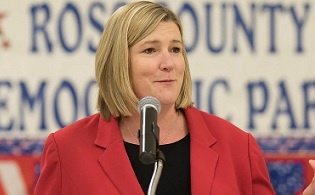 Originally from Indiana, Whaley came to the Buckeye State to attend the University of Dayton. She became the first member of her family to graduate from college. Whaley fell in love with the area, met her husband Sam, and then ran for city commission and eventually mayor in 2013.

Whaley ran for governor in 2017, but was edged by more well-known candidates, including eventual Democratic nominee Richard Cordray.

Whaley then re-emerged on the state’s radar in 2019 when she helped her community heal after a mass shooting in Dayton’s Oregon District. Nine people were killed and 27 people were hurt during the shooting.

Gov. Mike DeWine has already signaled his intention to run for re-election, making him the likely Republican to emerge after primaries.