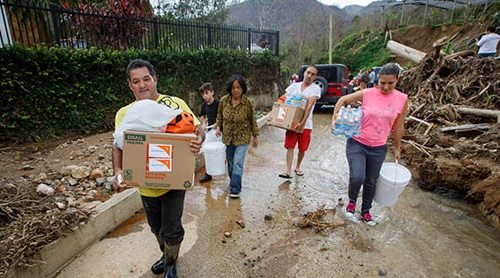 In 2019, The Washington Post reported that then-President Trump had told top White House officials “he did not want a single dollar going to Puerto Rico” despite Hurricane Maria becoming one of the deadliest U.S. natural disasters in over 100 years. And it appears he meant it.

According to a new probe by the Department of Housing and Urban Development’s Office of Inspector General, Trump officials repeatedly blocked Puerto Rico’s efforts to receive $20 billion in hurricane aid and then obstructed an investigation attempting to determine why the U.S. was depriving the U.S. territory of federal emergency relief funds.

Nicole Acevedo of NBC News reported that “tensions between [HUD] and the Office of Management and Budget resulted in unprecedented procedural hurdles that produced delays in the disbursement of the congressionally approved funds.”

According to Acevedo, the trouble apparently began in 2018 when the OMB started requiring HUD to send all the grant notices for disaster relief funds through a never-before-used interagency review process — a step that made it much harder for funds to be released in a timely manner.

Acevedo reported that the “Trump administration’s OMB also insisted on overhauls to Puerto Rico’s property management records, suspension of its minimum wage on federal contracts and other prerequisites to access relief funds.”

All of these additional roadblocks further delayed funding to the U.S. territory and in some cases made funds virtually impossible to secure.

“The Office of Inspector General began the review in March 2019 after Congress asked it to look into hurricane aid delays as the island sought to recover from a storm that resulted in the deaths of 2,975 people and triggered the world’s second-longest blackout,” Acevedo reported.

Seven months into the investigation, HUD officials admitted they had knowingly missed congressionally mandated deadlines in key paperwork, blocking the release of billions in federal recovery funds to Puerto Rico.

According to Acevedo, former HUD Secretary Ben Carson later defended those actions, citing concerns over corruption, fiscal irregularities within the territory’s budgeting and an overall “incapacity” to manage funds properly.

In total, Congress approved close to $20 billion in HUD funds for Puerto Rico following Hurricane Maria. But of that historic amount, the island received only a fraction of the money it was owed because of the numerous restrictions and requirements levied upon those funds.

In 2021, however, President Biden has already moved to right some of these wrongs. Less than 100 days into office, Acevedo reported that he has removed a number of the Trump-era restrictions placed on Puerto Rico and unlocked access to $8.2 billion in Community Development funds designed to “help the island build resiliency against future disasters” — funds that Congress originally approved in 2018.