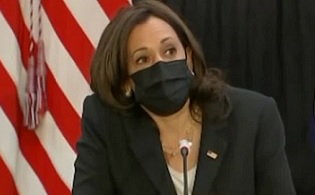 The gathering was billed as a discussion on infrastructure and public transit systems. Brown briefly hinted at the Brent Spence Bridge before the meeting began but it was not discussed. Harris was asked about possible funding for any Cincinnati bridges in President Joe Biden’s proposed American Jobs Plan.

“I can tell you that I know about the Brent Spence Bridge, and it is a very important bridge in America,” Harris said with a smile. “I am sure that there will be a lot of conversation about its qualifications for some support out of the American Jobs Plan.”

The head of the Southwest Ohio Regional Transit Authority (SORTA), Darryl Haley talked about changes the bus system has been making, specifically plans outlined in the new Reinventing Metro plan.

University of Cincinnati Professor Vikas Mehta pointed out the concept of what he called “soft” infrastructure, the spaces between public transit and where people live, like sidewalks, crosswalks and street lights.

“If we invest in the soft infrastructure, we’re automatically investing in our neighborhoods,” he said.

Harris called that an important point.

“If that mother or father can’t walk that stroller because the sidewalks are uneven or falling apart – and she’s got a child in a stroller and a toddler, well that’s going to mean that that will take at least twice as much time for her to get up, get down – and hopefully have somebody help her with the stroller – to get to the bus stop.”

Eddie Koen with the Urban League of Greater Southwestern Ohio picked up on that idea, too.

“I think about buses that have bikes on the front of them – well why don’t we have places for strollers on most buses? We have an opportunity now as we’re thinking about re-imagining transportation… We have an opportunity to think about who are the majority of the users, who are the end users, and include them. It’s a both/and, it’s not an either/or.”

Harris and Koen keyed in on racial equity around public transit. Koen says it takes the average worker about three hours getting to and from work. He points out it’s important to look for gaps in the grid. Harris called it the “opportunity cost.”

During the stop at BlaCk Coffee Lounge, a Black-owned business, Harris chatted with manager Tsheai Henry about the business and how they have been doing during the pandemic. She ordered a small Wakanda coffee with whole milk, telling Henry she’d read about the coffee. She was joined by Cincinnati Mayor John Cranley and his wife, Dena Cranley.

She exited the coffee shop to a joyful shouts from schoolchildren across the street at Cincinnati Hills Christian Academy’s Armleader Campus.

“I’m counting on you to be the leaders,” she yelled to them.