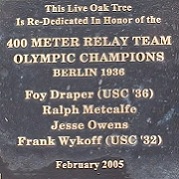 The legacy of athlete Jesse Owens, who grew up in Cleveland, was continued on April 30, when a clone of one of the oak trees given to Owens after the 1936 Olympics was planted at the Rockefeller Park Lagoon on Dr. Martin Luther King Jr. Boulevard.

The sapling was cloned from the now-84-year-old oak that was planted in Old Brooklyn at James Ford Rhodes High School in 1937 as a symbol of athletic and cultural triumph. It was horticulturally propagated—essentially cloned—in 2017 by Holden Forests & Gardens, working with Old Brooklyn Community Development Corporation (OBCDC) to preserve Owens’ Cleveland legacy and place in history.

Jesse Owens oak tree planting in Rockefeller ParkOf the four trees given to Owens, the Rhodes High tree is the only one known to remain. But the tree is now coming to the end of its natural life, explains OBCDC executive director Jeff Verespej. “It’s an honor for a neighborhood,” he says. “We’ve been charged with building this legacy. If it were up to me, this tree would be in the top five things to do when visiting Cleveland.”

Verespej says Holden Forests & Gardens took several other grafts of the tree, which will be planted in the future.

Owens, who was dubbed the best track star of the 20th Century in 1950 by sportswriters, was winner of four gold medals at the 1936 Olympics in Berlin, Germany, and was the world record holder in track and field. Yet he spent his entire life facing racism.

“He [is] one of America’s greatest success stories,” says Verespej.

Despite his Olympic success, Owens was not invited to the White House after the 1936 Olympics. He was honored at the Waldorf-Astoria in New York, but he was required to take a freight elevator to reach the event. But locally, Owens was welcomed home with a parade in Cleveland, famously inspiring future Olympian Harrison Dillard with a wink and a wave.

The German Olympic Committee gifted oak seedlings to gold medalists after the Olympics. The national trees of Germany were presented in pots adorned with the Olympic bell and the inscription, “Grow to the honor of victory! Summon to further achievement!”

Owens briefly worked as a playground instructor for underprivileged youth in Cleveland, ultimately becoming a playground director with Cleveland’s Parks and Recreation department. During World War II he was appointed as director of a national fitness program for African Americans.

He was named Ambassador of Sports by President Dwight D. Eisenhower in 1955 and toured the world promoting the virtues of amateur sports programs with a particular emphasis on opportunities for underprivileged youth. He continued goodwill tours into the 1970s and 80s. Owens received the Presidential Medal of Freedom from President Gerald Ford in 1976.