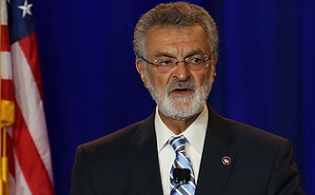 Make no mistake — Frank Jackson was the right man for the job when he took over the helm at Cleveland’s City Hall in 2006. And he has proven himself to be a good mayor.  A large part of his legacy now will rest of the fact he hung on to the levers of power for one term too long. Sadly, some darker aspects of Jackson’s term will overshadow the good things his administration accomplished. And even worse, these darker aspects of the Jackson administration were not all of his own making.

Years from now, when Jackson’s name comes up in conversation, the criminal antics of his grandson Frank Q. Jackson (who has repeatedly been in the news for his felony run-ins with the law, even being a suspect in a drive-by killing) and his under-aged great-grandson (who was charged with attempted burglary of a suburban gun store) will be foremost in the memory of many.

While hindsight is always 20/20, Jackson no doubt regrets giving disgraced former judge Lance Mason a job in his administration. While we are both supporters of  reentry programs, but Mason had just been released from prison after serving a term for brutally attacking his wife. Professionals working in the field of domestic violence and the public were furious that Mason had been given a  high-profile position at City Hall where he supervised women. When Mason then murdered his ex-wife, the media had a field day.

Add to that the “baby mama drama” of his Chief of Police, Calvin Williams, who has at least one and perhaps two children by an officer under his command. One comes away with the feeling that perhaps Jackson biggest flaw is that he is loyal to a fault. And loyal to a fault in terms of other hangers on at City Hall who have long outlived their value as a public servant.

But with all that being said, had Jackson decided to run for a fifth term he still would be hard to beat.

Jackson carried out the duties of his office with a steady, even hand.   He is not a high-profile media hog. But he does the job that needs to be done.

In spite of the fact that he is mayor of the poorest city in the United States, he has routinely gotten school levies passed and even got the citizenry to raise the income taxes on themselves. Considering how often suburban districts have shot down levies designed to improve the level of their children’s education, this is no small accomplishment.

To Jackson’s credit, there is development downtown, where new apartments and condos are sprouting up all over the place. While some might posit that he has focused too much attention on downtown to the detriment of Cleveland’s neighborhoods, new developments on the near Westside and communities like Glenville and Hough prove that criticism is only partially valid. They also bring in jobs and tax revenue. And let’s not forget the gleaming new sports palaces that have been built during his tenure.

But even great administrators can lose their edge over time. It is time for fresh ideas and new faces for the City of Cleveland.  Jackson has begun to move the city in a new and positive direction. It’s up to the next mayor to pick up the torch that should have been passed in 2017 and carrying it forward for a brighter day and make Cleveland the “Best Location in the Nation” again.