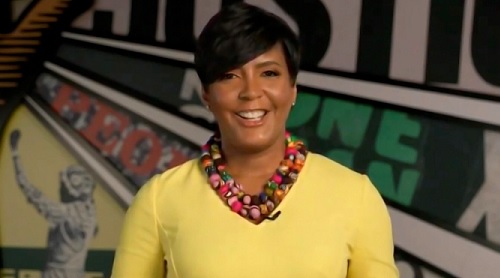 Literally out of nowhere, news that the rockstar mayor of Atlanta, Keisha Lance Bottoms, won’t be seeking reelection shocked the airwaves.

At one point, Bottoms was supposedly on the short list of possible Biden running mates and was poised to make another run at being mayor of Georgia’s capital. The announcement stunned supporters who have been Team Bottoms since Day 1.

“As Derek and I have given thoughtful prayer and consideration to the season now before us, it is with deep emotions that I hold my head high, and choose not to seek another term as mayor,” Bottoms said in an open letter, referring to her husband, Derek Bottoms, the Washington Post reports.

The Post notes that Bottoms was “well-positioned to raise money and win a second term” but decided not to seek reelection.

As my uncle would say, “Something is unclean in these greens.” We all know that you can leave a job for myriad of reasons. Hell, I quit a job because I was tired of working in a fishbowl conference room when everyone else had desks. Call me bougie. I can take it. But Bottoms was having a breakout season as mayor of Atlanta. In December, she turned down a chance to join Biden’s cabinet, claiming that she wanted to continue to help the people of Atlanta.

The president of the United States loves the woman and held a virtual fundraiser for her just last month. How many times has the president done this since taking office, you ask? Not never. He did it once and it was for Bottoms.

Bottoms already had one challenger for the Nov. 2 election — Atlanta City Council President Felicia Moore — and the incumbent mayor’s decision not to seek reelection is likely to attract several more candidates.

Bottoms, 51, who was elected mayor of Georgia’s capital in 2017, gained a national profile in the wake of last year’s unrest in major cities across the United States in response to the death of George Floyd in police custody in Minneapolis.

What makes this even more troubling is that it is not clear where Bottoms is headed after leaving office. Normally all kinds of rumors began leaking as to where the official who no longer wants to hold office is going, but this was such a shock that no one has any idea what her next move may be.

Bottoms wrote in her letter that she is “not yet certain of what the future holds,” the Post reports.

“It is my sincere hope that over the next several months, a candidate for mayor will emerge whom the people of Atlanta may entrust to lead our beloved city to its next and best chapter,” she wrote.

I’m confused. Never has someone with such star potential just walked off the stage at the end of the show and noted that they have no plans of running again. Something is up and I hope this is all a political move for something bigger that I just can’t see. And before you say, she’s going to run for governor, I will assure you that’s Queen Stacey Abrams’ job.

Bottoms held a press conference and instead of quelling rumors as to why she won’t be seeking reelection, she actually listed her bona fides, making this even more puzzling. Bottoms noted that her not seeking another term had nothing to do with weakness but rather strength. She added that she was poised for another term and had literally raised a boatload of money and probably would’ve cruised to victory as the majority of the city still loves her. So what gives?

Can it be exactly what Bottoms said? That she chose this job for four years and is ready to cast her fate into the wind and see where the gust takes her? Sounds extremely unpolitical, doesn’t it? I mean we want our politicians to be cold, and calculated, and cunning, and could it be that Bottoms is just burned out and ready for a break? That can’t be it, could it? Oh reader, you are so skeptical of everything, and I love it.

of her tear-filled goodbye and then come back to me in the comments, so we can hash this out.

Senior Editor @ The Root, boxes outside my weight class, when they go low, you go lower.