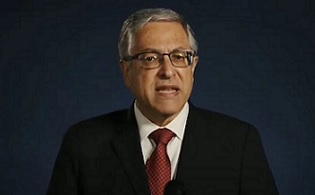 After weathering a difficult year of loss during the coronavirus pandemic, Cuyahoga County is preparing an influx of resources for neighborhoods with the most economic needs, County Executive Armond Budish said Thursday in his annual state of the county address.

Budish delivered the remarks virtually, in a pre-recorded speech streamed online, interspersed with videos highlighting the county’s response to COVID-19. Afterward, he answered audience questions in a conversation with City Club of Cleveland CEO Dan Moulthrop.

In his roughly 40-minute speech, Budish recounted the county’s more than year-long effort to thwart the spread of COVID-19: the scramble to secure personal protective equipment, the reduction of the jail population, aid to businesses and renters, the distribution of vaccines and work to secure hotel rooms for those without a home.

“This has been an indescribably awful year of so many, a year of real and personal loss,” Budish said, citing the loss of family, friends, businesses and homes. “Thankfully, as more and more of us get vaccinated, we can see light at the end of the tunnel.”

“Traditionally, we deploy resources throughout the county like peanut butter, some here, some there,” Budish said, naming road projects, broadband access and tree-planting among those important but often scattershot investments. “But clearly, some of our communities need more than just a schmear of support.”

Budish did not attach a price tag to the program Thursday. The county will work with other local governments receiving federal aid through the American Rescue Plan to improve internet access in Central, according to a press release.

Cuyahoga County is slated to receive almost $240 million from the latest federal stimulus package, and the city of Cleveland is expecting its own surge of $511 million over the next two years.

In the question-and-answer session Thursday, Budish did not elaborate on how the county plans to spend its allocation. Budish did say he has spoken with Cleveland Mayor Frank Jackson. Gov. Mike DeWine and Lt. Gov. Jon Husted about coordinating the county’s spending with the city and state.

“We don’t want duplication,” Budish said, “Instead, we want to leverage the funds that we have with the work that they’re doing as well.”

The county executive said his administration also plans to talk with other elected leaders and groups like the Greater Cleveland Partnership – the regional chamber of commerce – about how to spend the money. When asked, he said he would be open to input from the general public, too.

A former speaker of the Ohio House, Budish has not said whether he would seek a third term leading the government of the state’s second-largest county. He did answer one question posed online by his prospective Republican challenger, Lee Weingart, who pressed the executive on how the county could afford a planned new justice center and jail.

Budish maintained that the county does have the capacity to take on debt for the project, which could cost as much as $500 million, without additional taxes.