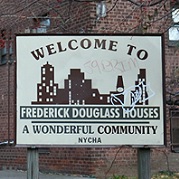 “He was drafted out of college at 19 years old into service in the segregated armed forces to serve as a prison guard and driver to white officers, and attended a segregated college campus,” said his daughter.

The New York Times reported Ryder died on February 17, in his New Rochelle, NY home. The death was confirmed to the outlet by his daughter Lorraine Ryder. As an architect, Ryder and his firm designed important sites for Black culture and became one of the country’s prominent partnerships of Black architects. Together with J. Max Bond Jr.,the two men createdBond Ryder & Associatesin the late 1960s.

The firm is responsible for the creation of the Martin Luther King Jr. Center for Nonviolent Social Change in Atlanta, which includes Dr. King’s crypt; the New York Public Library’s Schomburg Center for Research in Black Culture in Harlem; the Birmingham Civil Rights Institute in Alabama; and the Studio Museum in Harlem, which champions Black artists according to the Times.

The firm later included the talents of John A. James and also designed residential buildings including the Lionel Hampton Houses, the Frederick Douglass Houses, and the Towers on the Parkleaving their mark on the famed Manhattan skyline.

“Their designs provided outdoor gathering spaces for the community wherever possible,” said John Samuels, a former colleague of Ryder’s to the Times. “Don’s philosophy also included providing opportunity to members of this same community to participate in the design process and influencing their own built environments.

Gordon J. Davis, the founding chairman of Jazz at Lincoln Center, spoke on the impact of the firm. He was a close friend of Bond.

“Two young, progressive, community-sensitive, smart Black architects starting a firm in New York City in the late 1960s was a very bold and some thought foolish step — doomed to fail. But they did good and touched many of the most significant Black institutions,” he said in an email to the outlet.

“The firm had a reputation for excellence, a quiet determination and a community-based aesthetic,” Mr. Davis added. “They were in every sense pioneers and trailblazers and highly respected.”

Ryder was born August 28, 1926 in Springfield, OH. After his mother passed, his father remarried and he and his two siblings were raised in the nearby Dayton, OH. He served in the Army Air Forces from 1945 to 1947 before attending  University of Illinois as a chemistry major, following the footsteps of his father who worked as a chemist. He learned, however, it was not his purpose.

“He was drafted out of college at 19 years old into service in the segregated armed forces to serve as a prison guard and driver to white officers, and attended a segregated college campus,” said his daughter Gail Perry-Ryder Tigere to the Times. “So he was all too familiar with the indignities of racism in everyday life.”

His daughter Natalie Ryder Redcross shared “My father was always a talented artist and painter, so he figured he’d try architecture instead, and found his strength in drafting and design.”

He left the firm in the 1990s and became Professor Ryder and later chairman of the Spitzer School of Architecture at the City College of New York. His start with the institution was in 1972 when he became a lecturer. He taught until his retirement in 2001.

Ryder is survived by three daughters, his wife, his sister, his brother and four grandchildren.