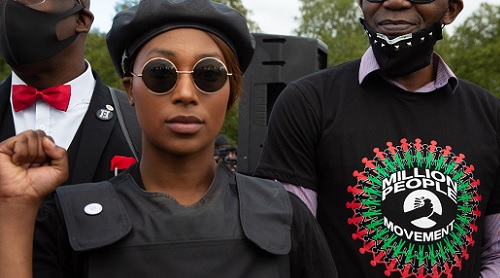 London police have charged an 18-year-old man over the shooting of prominent Black Lives Matter activist Sasha Johnson, who remained in critical condition on Friday.

Johnson, a 27-year-old mother of three and vocal equal rights campaigner, was shot in the head at a house party in south London last Sunday. Police said they did not believe she was specifically targeted.

On Friday, London’s Metropolitan Police said Cameron Deriggs has been charged with conspiracy to murder in connection with the shooting.

Deriggs was among five men arrested last Wednesday on suspicion of attempted murder in the case. He and two others were also arrested on suspicion of affray (a group fight) and possession with intent to supply Class B drugs.

Deriggs remains in custody and is due to appear at Westminster Magistrates’ Court last Saturday, while the other four have been released on bail, the Metropolitan Police said in a statement.

Johnson rose to prominence last year during the Black Lives Matter protests, as a leader of her Taking the Initiative Party (TTIP), which has been called “Britain’s first Black-led political party.”

According a police statement, she was shot around 3 a.m. last Sunday when “a group of four black males dressed in dark-colored clothing entered the garden of the property and discharged a firearm.”

The TTIP said Thursday it was concerned police were using people in the community as “scapegoats” for her shooting, claiming recent arrests were made with “no valid evidence.”

“Arresting these individuals on this basis and highlighting that they were carrying drugs with intent to supply, is subliminally suggesting that this is a gang-related crime as opposed to an attempt of murder,” it said.

The TTIP concluded that although they “want to see the attackers brought to justice, we do not want potentially innocent people charged with attempted murder and becoming part of the statistics, subjects to the injustices that Sasha has been fighting against.”