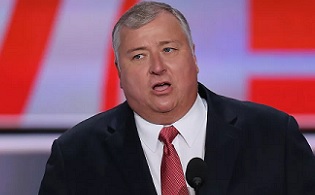 The embattled former House Speaker is named in a $61 million bribery case.

Larry Householder has been expelled from the Ohio House.

State representatives voted 75-21 to remove Householder last Wednesday. The state constitution has a little-used clause allowing lawmakers to remove one of their own for “disorderly conduct,” the Cincinnati Enquirer noted.

In July 2020, the Department of Justice and FBI accused Householder and his associates of of accepting and overseeing distribution of $61 million in “dark money” to pass a bailout bill for two Ohio nuclear plants. The majority of the money went to advertisements to attack opponents of House Bill 6 and support candidates who would pass the legislation, the investigators said at the time.

Despite the public accusation, Householder remained a member of the Ohio House, though he did lose his role as speaker. He has pleaded not guilty to the accusations.

Throughout a contentious discussion on Householder’s future this week, the embattled representative maintained his innocence and accused his colleagues of condemning him before a verdict had been reached. He repeatedly said he had never accepted or provided a bribe.

Find out what’s happening in Cleveland with free, real-time updates from Patch.

Democrats celebrated the explusion, while Republicans remained largely mum in the initial fallout.

“Make no mistake, there is no joy in seeing a former Ohio speaker removed from office in disgrace, but this is our opportunity to stand against corruption and to turn a page on this dark chapter in Ohio history and begin to rebuild the people’s trust in a government that’s supposed to work for them,” said Ohio House Minority Leader Emilia Strong Sykes.

Dayton Mayor Nan Whaley, who is running for governor, was also quick to celebrate Householder’s removal on social media.

“Members of the Ohio Statehouse finally had the courage to do what Gov. DeWine would not: hold Larry Householder accountable for his role in the largest bribery scandal in Ohio’s history,” she said on Twitter.